Raising a Puppy: Spencer the Blue-Nose Brindle Pit Bull Getting Over his Apprehension of Indoor Hard Flooring

We noticed the day we brought Spencer home that he preferred to be outside. He didn't want to walk in the front door of the house and he didn't want to step out of his crate. If he was in the house and outside of his crate he would stay on the dog bed, small carpet in front of the door or walk into a corner somewhere and stay there. It is natural for puppies to be cautious of new things. Some pups are more cautious than others. Spencer most likely grew up on carpets and was not used to the feel of walking on hard indoor flooring. 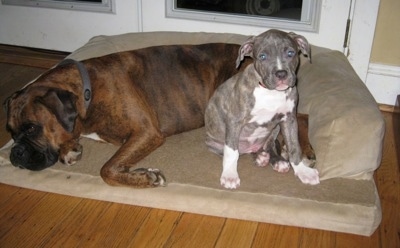 Since Spencer refused to walk in the door by himself, and waiting with the door open was letting not only hot air but bugs into the house, I decided to work on what he was actually afraid of before working on having him come through the doorway. I brought Spencer inside the house and set him at the door. I put a leash on him and tried to coax him to walk forward. No go. He was not going to budge. I had to be careful not to give him any type of affection or praise while he is unsure about his surroundings or it may cause him to be more afraid. He has to work this issue out in his mind. 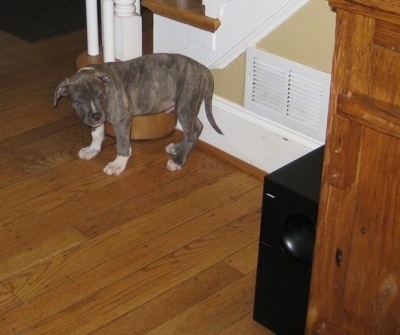 I picked him up, put him in the middle of the living room floor and left him there. He made his way to the wall and stayed there.

I next tried using food to help associate the floors with something positive. He walks, he eats. It worked!

Notice how he is getting more and more comfortable in the second clip than he is in the first.

After getting him used to the living room I attempt to lure him into the kitchen. Watch how cautious he is when he has to change thresholds.

Moving on from the living room to the kitchen with success…

…and from the kitchen to the dining room. This pup will be over this floor issue in no time at all so long as no one in the house gives him affection while he is unsure and rest assured, no one in this house will. :)

Update: The Next Day

To help Spencer get over his hesitation with coming inside the house Sara played with Spencer and one of his favorite toys outside, and every few minutes would open the front door and place the toy just inside the door. If Spencer wanted to keep playing he had to go and get the toy. 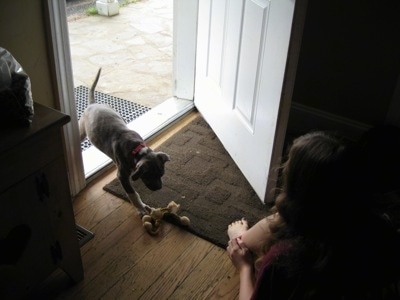 She starts off with the toy close to the step. She tells him to get it and shakes it to encourage him. Sara does this calmly; she is not talking excitedly with him. Her voice has a happy, gentle sense of leadership to it. Spencer responds well to this… 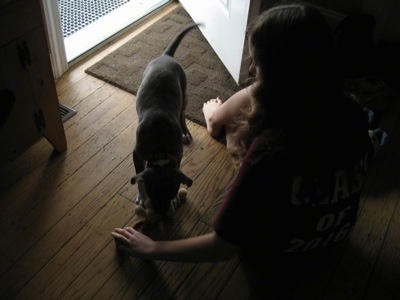 …and moves further inside each time. In between the times she places the toy inside the house, she goes back outside and plays a game with him as reward for getting the toy. 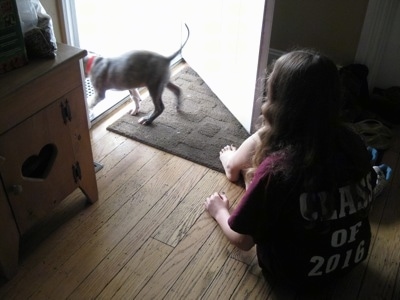 Spencer gets the toy and darts back outside for the game.

A few hours later we open the front door and Spencer comes inside the house as comfortable as can be and walks right to the dog bed, plopping down for a rest! Good job, Sara!

Had we just dragged him inside the house using force, or given him pity or affection rather than encouraging him to be strong and do it himself, this issue would have lasted longer and may have caused him to become insecure or have other emotional issues. Giving him gentle leadership and the chance to discover on his own that there was nothing to be afraid of will help his overall mental stability.

Spencer walks around the house and in and out the door with no problem. Seems this issue is completely gone.