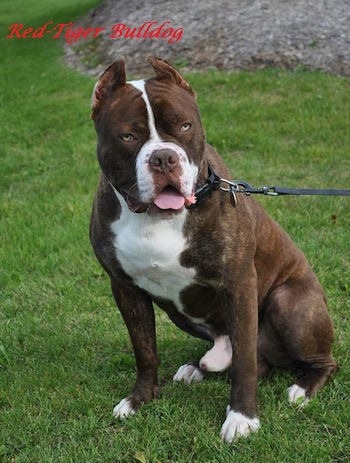 The head of the Red-Tiger Bulldog should appear broad, flat on top and of medium length with pronounced cheek muscles and a distinct stop. The head appears to have been chiseled; expressing great ability, rustic Bulldog elegance and character, The RTB’s head should give the impression of enormous power, but should not be disproportionate to the overall size and confirmation of the body.

The muzzle should be broad with wide-open nostrils moderate in length approximately 2.5”-3.5” The muzzle should be wider at the base with moderate to little taper toward the nose. The lips should be full with red or reddish brown pigmentation; some pink allowed but not preferred. The chin is well defined and should be even to or slightly overlapping the upper lip but not cover it, its length and width should be proportionate to the overall head side.

The Red-Tiger Bulldog has a complete set of medium to large white teeth and should not be visible when mouth is closed. A tight undershot (reverse scissors) preferred. Undershot up to ½ inch acceptable (Less is better). Lips are moderately thick; Red or Reddish Brown pigmentation lining the lips; with some pink allowed. Note: Red-Tiger Bulldogs are a working breed and should not be penalized for broken or missing teeth. Faults: Small teeth. Level or scissor bite. Disqualification: Parrot mouth or closed mouth with visible teeth, Overshot or wry mouth.

Red-Tiger Bulldogs eyes should be medium-sized and almond or round-shaped. They should be well set in and moderately to widely set apart. Lighter eye color is a must. Hazel/green/golden/grayish or blue. The haw should not be visible. Red or reddish-brown eye-rim pigment is a must; all other colors of pigmentation are considered Disqualifying/None Register Able.cosmetic extras: When both eyes do not match in color, Example; one eye being blue and the other eye being hazel, (this is called skittle eyed) and is allowable and desired in the Red-Tiger Bulldog breed. When both eyes are blue in the Red-Tiger Bulldog breed (this is called candy eyed) and is allowable and bery desirable.Serious faults are crossed or non-symmetrical eyes.

Red-Tiger Bulldogs eyes should be medium-sized and almond or round-shaped. They should be well set in and moderately to widely set apart. Color: lighter eye color is a must. Hazel/green/golden/grayish or blue.

The ears should be set high on the head, medium in size and are preferred cropped. This breed must be cropped when in the show ring. None cropped or natural ears are none show-able. With exceptions given in countries where cropping and docking are illegal. Outside the show ring, they may be drop, semi-prick, or rose when natural. Faults in the ears are hound ears and bat ears.

The Red-Tiger Bulldog should have a “mantle” coat design, of at least 70% color and no more than 30% white. The color shall be brindle and white with a solid brindle body suit/blanket extending over the body; A brindle skull with white muzzle; a white blaze is preferred, but optional; A white collar is preferred BUT a break in the collar or no color is expectable; A white chest is optional; White on the feet is preferred, white on part of the forelegs and hind legs is acceptable; A small white marking in the brindle body suit/blanket is acceptable. The Red-Tiger Bulldog only comes in varying shades of red or reddish brown-brindle, including, red brindle, chocolate brindle, liver brindle and cinnamon-brindle. The Red-Tiger Bulldog is also known to exhibit a “mosaic brindle” pattern within its phenotype, where two or more variations of brindles strive to express themselves in the same animal, causing one shade of brindle to inhabit the body suit/ blanket and yet another shade of brindle to cover the inner legs, underbelly and jaw. Specimens of the red-brindle variation of the “mosaic brindle” coat pattern are the most highly valued.

The RTB’ neck, should be massive and imposing, “never” thin or elegant. The RTB’s neck is very powerfully built and should display pound for pound “the physical appearance of harboring enormous strength”, the neck should be widest at its base, even to the point of being as wide as the rear of the occiput (rear of the head)

The back” should be very firm and solid beneath the hide; it should exhibit moderate to ample definition, the Top line should be level, while allowing a slight downgrade near the withers when young. A very moderate roach is expectable but not encouraged.

The shoulder / upper- arm region of a RTB is worn like a badge of honor, for it is one of the RTB’s most imposing and enduring attributes. The shoulder of a RTB, like the pads of a NFL running back leads the dog into and through the fray of opposition with power, while serving as protection against any excessive contact. The shoulder should always be one of the more defined / ripped attributes of a RTB’s muscle anatomy. The shoulder must appear conditioned, and massive, it should display each of the three parts of the triceps muscle during movement and the deltoids should appear as two moderate to prominent cords traveling from the triceps up into the wither and neck region.

The chest of a RTB should appear to be carried proudly and give the impression of a gladiators shield or breastplate leading him into battle. When sitting, the pectoral muscles should protrude forward revealing ample to extreme levels of striation incased by the outward rounded deltoid/ and triceps muscles of the shoulders. When standing this same chest muscle should appear heavily padded and should be attached to the breast plate/sternum and only allow a void spot appearing as two small sunken pockets residing one per side of the breast bone.

The “hind quarter” consists of the most explosive muscle groups in a RTB’s anatomy. The rear end of a RTB’s anatomy is its principle driving force and should physically exemplify breath taking levels of energy and explosive power. Each member should be very round both inside and out when standing. The hind quarter should appear charged and ready to explode into action. When in motion, the hind quarter should exhibit several points of definition and appear to propel the animal forward with an extreme level of controlled thrust.

The RTB is trustworthy and discerning, with a desire to under-gird his master. The confidence this breed carries in its eyes and the bold please itowcases, serves as a deterrent to any home/ property or personal threat. The Red-Tiger Bulldog is always loyal to its family but may not be welcoming to un-escorted house guest. They can be domineering and aggressive to strange dogs and animals if not imprinted / encouraged to do so from a young age. They have a strong prey drive. Early socialization / obedience training is advised to stifle the possibility of aggression with strange dogs and small vermin like animals. They get along well with familiar dogs and animals. The Red-Tiger Bulldog needs a firm, consistent and confident owner. This Breed is intelligent and eager to please, yet can be stubborn and push for play time during training sessions. A brisk walk or short play break prior to training sessions tends to burn enough energy to curb this issue. Mild corrections and ample amounts of verbal praise tend to produce a positive response. Overly aggressive physical corrections or dominance can do irreversible physiological damage. Red-Tiger Bulldogs have a great memory and retain lessons quickly. It is imperative that the Red-Tiger Bulldog understands that the human pack members are all superior to them in the pack order. The Red-Tiger Bulldog is outgoing and mild mannered, gentle and submissive to children. They can be aloof with unannounced strangers as their watchdog prowess is expressed, but will calm right down with the reassurance of their master. Red-Tiger Bulldogs are very protective of their owners and their owner’s property and will be loyal to them, even giving their own life.

The Red-Tiger Bulldog requires a consistent puppy diet during the first year of growth, irregular feeding patterns, overfeeding, or lack of puppy nutrition can result in down pasterns and or knuckling over in the forelegs.

The Red-Tiger Bulldog will do okay in an apartment if it is sufficiently exercised. They are relatively inactive indoors and will do best with at least an average-sized yard.

The Red-Tiger Bulldog should be taken on a long daily walk. This breed does well in city and rural areas, regular play time as exercise or a moderate walk is a must. They are moderately active dogs and love to have a physical outlet. RTB’s are an “endurance endowed” breed, developed with a leaner and more athletic structure than common to many dogs of bulldog heritage. They are explosive, quick and agile, requiring mental stimulus as well as physical.

The short, harsh coat is easy to groom. Comb and brush with a firm bristle brush, and bathe only when necessary. This breed is an average shedder. The Red-Tiger Bulldogs being a short slick coated breed only requires minimal grooming, regular brushing and washing as needed will keep them show worthy. Regular walks will keep their nails at a healthy length.

The Red-Tiger Bulldog was created by Rev. Scott L. Amos, Sr. and his son, Scott Amos II in the central Indiana region of the United States, beginning in 1991. The Red-Tiger Bulldog was developed from a foundation of red-nosed American Bulldogs owned and produced by Rev. Scott L. Amos, also known as “Scott Free” and his then international breeding program "Amos American Bulldogs" and "Free-Style American Bulldogs". The Red-Tiger Bulldog’s Breed, Breed Registry and Archive received the government’s principle registration (Serial #85002578) with the United States Patent and Trademark Office on January 1, 2011 as “The First Red-Nosed (Breed) of Bulldog in the history of the world”. While most other bulldog breeds exhibit traces of red-nosed specimens as a less desirable traits within their black nosed breed standard. The Amos’s have developed the Red-Tiger Bulldog to reproduce exclusively dogs of pheomelanin / amelanistic skin and coat colors of red or reddish brown in a brindle pattern. The word “Tiger” in the breeds name is derived from the brindle tiger like striping in the Red-Tigers coat pattern. The ”Red” portion of the breeds name is descriptive of the red or reddish brown skin and coat color, while the word “Bulldog” in their name characterizes the heritage of the breed’s ancestral genetic composition.

In the late 90’s Rev. Amos infused Ca de Bou – Mallorquin bulldogs, Banter Bulldog and pure Old Southern White Bulldog genetics for out-cross vigor; This complex infusion allowed the Red-Tiger Bulldog strain to attain higher levels of health, refined structure; (allowing enhanced endurance), and a more cephalic head, Jaw and respiratory system; (which allowed clean breathing), rather than the historically poor respiratory system existing in many other bulldog breeds, which stemmed from the more common brachycephalic jaw and respiratory that bulldogs in general were founded from.

In the mid 2000's The Amos's added Levitt-mixed Bulldog blood and mixed-bred bulldog blood from the southern US, such as Talladega, Huntsville, Birmingham, Alabama and one Bulldog/ Boxer Strain in particularly produced by Hobbyist breeders Mr. and Mrs. Kendrick Swain of Atlanta GA… to expand the genealogical stance of the RTB's lineages.

Although, inevitable evolution is at hand, the Founding and developmental dispensations of this Breed have been surpassed and the RTB is now a beautiful reality rooted in the History and archives of America. 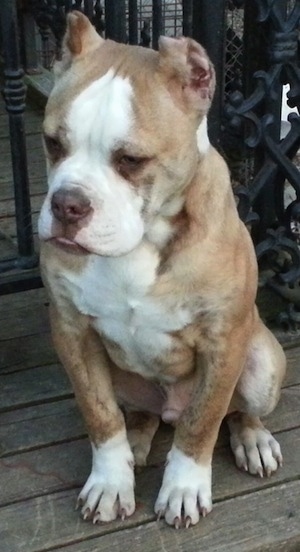 Red-Tiger Kennels Red "Faygo" the Red-Tiger Bulldog puppy at 4 months old—"RTK's Red "Faygo" was produced by Scott Amos,II in Central Indiana. He now resides in Northern Indiana with the Sanford family. "Faygo" is considered to be a strong breeding prospect and is treasured because of his rare, light red-cinnamon brindle coat color/pattern and his masculine head type." 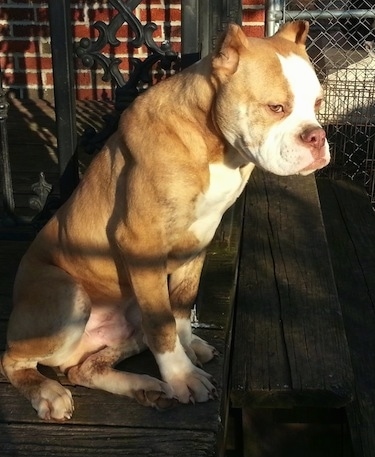 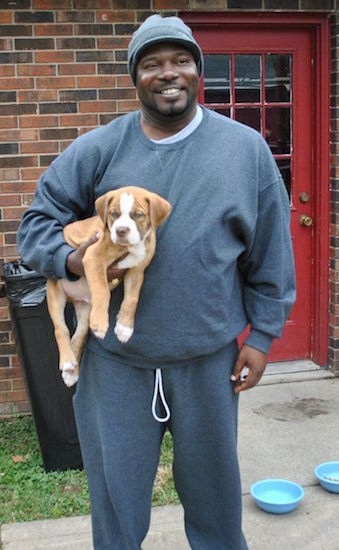 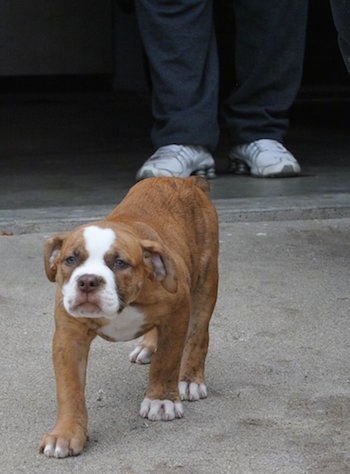 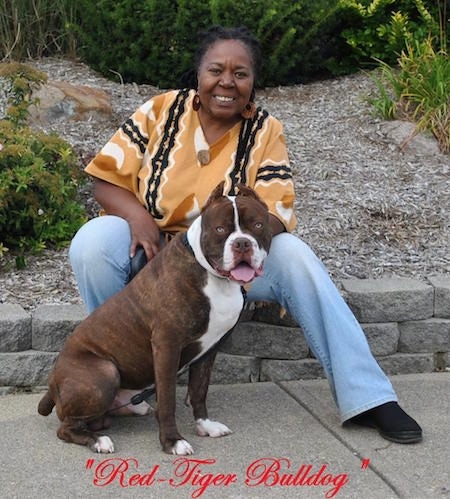 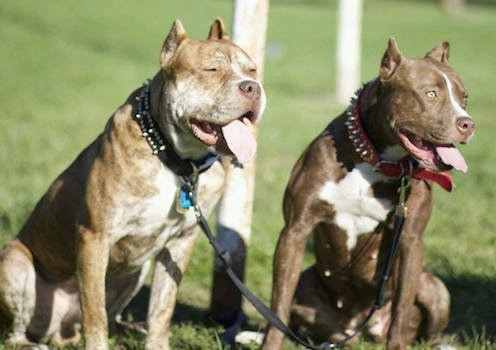 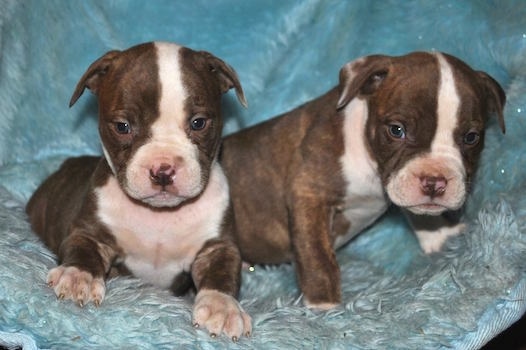 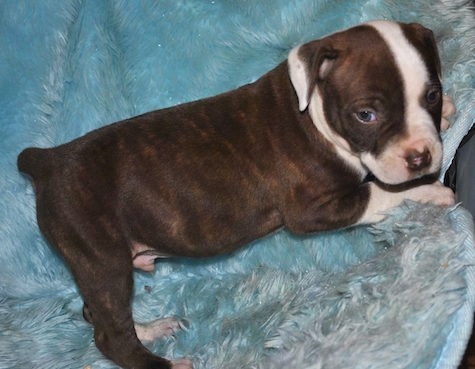 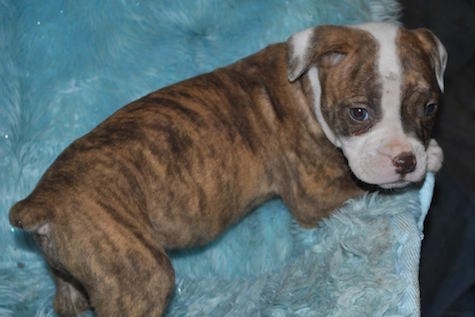