A day in the life with Bruno the Boxer. 3 years—86 pounds, 24 1/2 inches from the ground to the highest point of the shoulders (the withers). 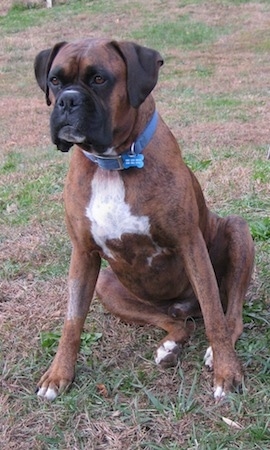 When Bruno was a year old he got his back left leg caught in the glider that is kept on the porch. The glider was under the window and he jumped up on it to look into the window. He was taken to the vet to get his leg checked. At the time we were told he could have a slight ACL tear but there was no way of telling for sure as there was no movement in his knee joint and his x-rays looked OK. With limited activity he appeared to heal up just fine and was no longer limping. I had since moved the glider away from the window.

A couple of years went by and he didn't appear to have an issue with that knee at all. He lived with Allie the Boxer who was not a very active dog due to her bad hips and knees. Life went on on the farm. Then one day we adopted Spencer the American Blue Nose Pitbull Terrier and suddenly the activity level among the dogs picked up. Bruno had a new playmate and being only 3 years old he took full advantage of this new fun. 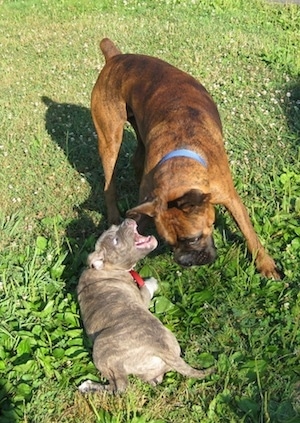 I started noticing him limp a little for a few seconds after he would get up from lying down. I was not sure what to think of it. It was only noticeable if you looked at him very closely and after a second or so it was gone. Bruno was checked by the vet and diagnosed with Lyme disease and anaplasma. He had been vaccinated for Lyme but had contracted it anyway, and there is no vaccine for anaplasma. This appeared to be the reason for the limping. 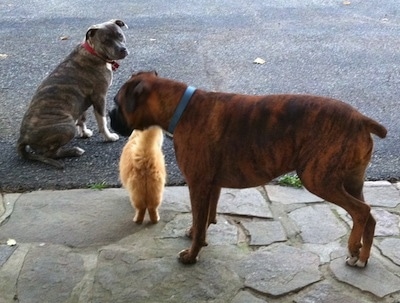 But after being on meds for three weeks with no improvement in his limping and joint pain in his back left leg it became apparent that there was something else wrong. More and more he would hold his leg in the air. Other times he would walk on it just fine.

Things were not improving and I started noticing that he was putting all of his weight on his right leg. His right leg muscle was larger than his left; a sign that this had been going on for quite some time.

It kept getting worse. We held him back from playing and activity as much as possible but it was like a roller coaster ride. Up and down, good days and bad days. The vet was not able to detect a tear; there was no play in his knee. Two sets of x-rays showed slight arthritis starting. A black spot on the x-ray near the knee showed up which caused a bit of alarm. Yet there was no play in his knee. We were not sure if it were an ACL tear, some other kind of tear or even an illness or something genetic.

There was only one way to know for sure what was going on with Bruno and that was for him to have an MRI done. 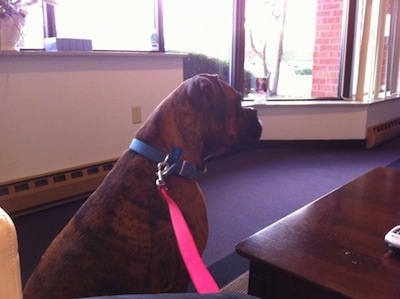 Bruno waiting in the pet imaging center for his MRI. The staff reported that they all received lots of kisses from him. His left leg and back were scanned. The results of the MRI showed a slight ACL tear in his left knee—too small to detect with the normal leg manipulation but big enough to make him go lame. A date for surgery was set to fix the ligament tear in Bruno's knee. 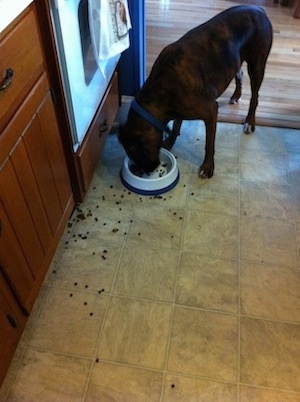 Later the same night after Bruno's MRI he was still under the effects of the anesthesia and boy did he make a mess eating his dinner! 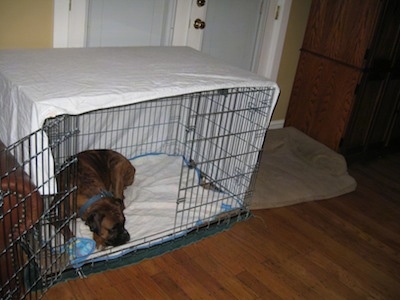 Bruno's dog bed was exchanged for a crate to help prepare him for the upcoming operation. The crate will make it easier to keep his kid brother Spencer the Pitbull from starting a play brawl with him. As soon as the crate is set up Bruno got in on his own without being asked. At one point I took the sheet off the top trying to decide if it needed to be there. When I took it off Bruno had gotten out of this crate and went into Spencer's crate in the kitchen, which has a sheet over it. I put the sheet back and he went back into his crate again. Apparently he likes the crate to appear more like his own personal den with the privacy of walls. So the sheet stays. 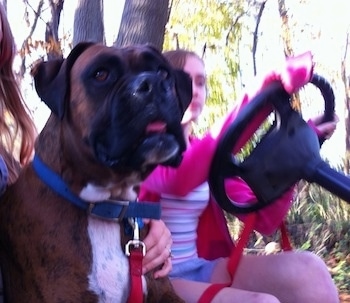 There were a few more days until Bruno's ACL corrective surgery and the big guy needed to take it easy on that leg. The less the knee is irritated at the time of the surgery the better his chances of recovery are. That means no long walks for Bruno and even short ones seem to bother him. Since we can't exercise his body we still have to try and exercise his mind by taking him places. Bruno gets a ride on the golf cart while... 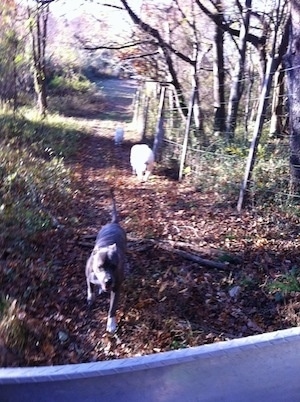 …the rest of the pack follows behind. Bruno wants to get off the cart and hunt around but we can't let him. Sorry boy, but it's for your own good. 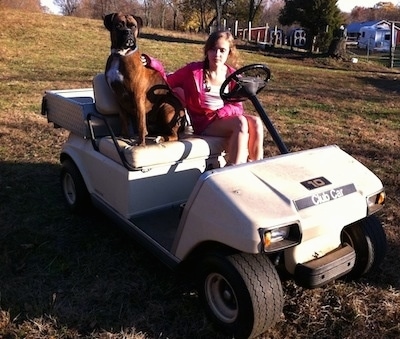 Bruno sitting on the golf cart with Sara