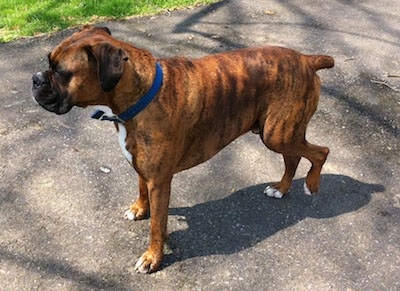 Bruno continued to limp on this left leg. He went back to the vet several times, then went to see a second vet who took hip x-rays and discovered his left hip looked slightly abnormal, but not enough to cause him so much pain. He also had back x-rays and a bridging of his upper spine was discovered. That would not be causing him the pain either, however.

He was taken to a hip and knee specialist for a third opinion. 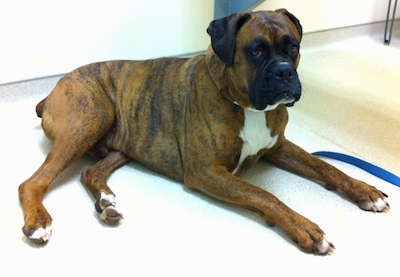 The specialist had all of the prior vet records sent to him and had reviewed them. He examined his knee and knew very quickly that Bruno's first ACL surgery had not held up. He explained that Bruno's first surgery was called a lateral suture and that type of surgery does not hold up very well in large-breed dogs, especially a 90-pound dog as active as a Boxer. Bruno's knee was slipping back and forth. Bruno's surgery had used nylon crimps to hold the knee in place.

Bruno's hips were also checked again and he was diagnosed with moderate hip dysplasia. The specialist said that his hips were not horribly bad at this point and would most likely not bother him until he was a lot older. It was Bruno's knee that was causing him to hop around on three legs.

Bruno is getting operated on for the second time. This time he is getting a TPLO (Tibial Plateau Leveling Osteotomy) procedure. Here we go again, round two of recovery.

Bruno before his second ACL surgery—notice how he limps heavily and holds up his left leg. Those cats sure do love him. 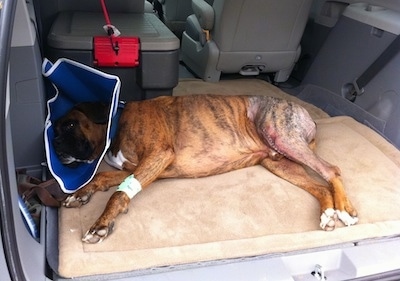 I picked Bruno up from the vet. As always everyone loved Bruno, commenting on how goofy and well behaved he is. They said he would do anything they ask, would let them do anything to him and was always wagging his nub at them. He has been through a lot lately and definitely is not associating any of his hardships with the vet’s office. To him life is always just one big joy. 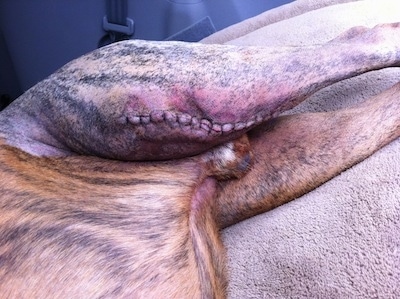 Bruno's leg is red and a little bruised at the incision site. 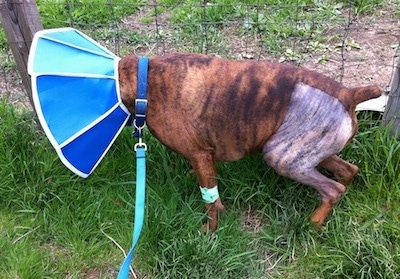 When we first arrived home Sara and I lifted him out of the car and set him on his feet. Bruno needed to go to the bathroom. I could tell his mind was on walking to his usual pee and poop areas. He did his thing, really having to go in both areas.

This is Bruno finding a spot to do his business. He is not using the leg at all at this point, which is to be expected. 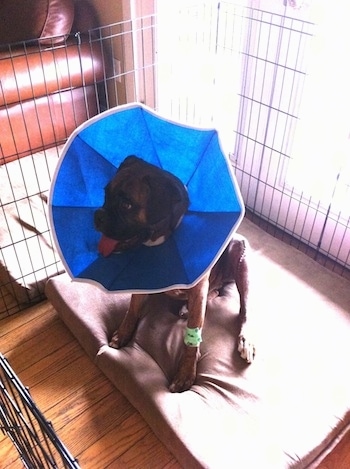 I led him to the place where he will be spending a lot of time in the next several months. I put an x-pen around his dog bed. Bruno sat on his bed for a while. He was home, but now what? Luckily the vet provided sedatives for his recovery. Bruno is going to have to spend a lot of time in this x-pen for the next several months and it is very important that he stays calm and quiet. He had a TPLO procedure done; they cut part of his bone and rotated the angle to take the pressure off of his ACL area. The larger ligaments in the front of his leg will now be doing all of the work. Proper healing is paramount for this type of surgery to be successful. His bone has to heal up along with the rest of his insides. 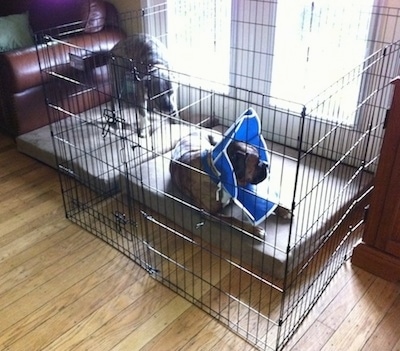 We had the Spencer-pup locked in the kitchen when Bruno first came into the house and entered his pen. When Bruno was safely in the pen, Sara opened the kitchen door but asked Spencer to stay for a little. When Bruno relaxed and Spencer calmed down Sara let Spencer free to sniff all the new smells on Big Brother Bruno. Oh boy was Spencer happy to see his brother. Thanks to the x-pen the pup only got to look and smell him. Oh boy, oh boy, oh boy, Bruno, you’re home! The pup danced all around his pen. Sorry pup, you can't play with your big brother for several months. 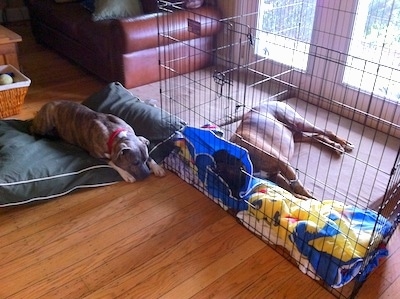 Bruno is allowed to have one-half to two sedative pills every six to eight hours. I gave him half a pill and it did the trick; he went right to sleep. No, I didn't give any to Spencer. The pup is tired from the long walk we took before I picked up Bruno. It was important that Spencer was calm, relaxed and tired so Bruno would have an easier time adjusting to his new pen.

Patient MUST be confined to a restricted indoor area for 16-20 weeks. It takes a minimum of 8-12 weeks for the bones to heal properly.

Leash control outside for 16-20 weeks. He is only to do his business and come right back inside. Going outside to do his business is restricted to two to three times a day for three to five minutes each time. No actual walks are allowed, no off-leash allowed.

Stitches come out in 12-14 days and he must wear his Elizabethan collar at all times until they come out. Luckily the collar is very flexible, almost like a hard cloth. Much easier and more comfortable than the hard plastic collars that were given to him in the past.

Bruno will get checkup x-rays at five weeks from the date of the surgery to see how his bone is healing.

"One of the most difficult aspects of confinement is that your pet will likely feel better long before the healing process is complete. At this point your pet will become more careless with the operated leg, and is more likely to become overactive, and may cause injury. You MUST adhere STRICTLY to the confinement guidelines until the leg is fully healed."

Thank goodness for the sedatives or I don't know if the above would be possible.

Warm compresses are used to increase blood flow and circulation to relax muscles in the area and to facilitate muscle stretching. After the three days of cold compresses, apply warm compresses three times a day for ten minutes for two weeks.

The Rules For Confinement 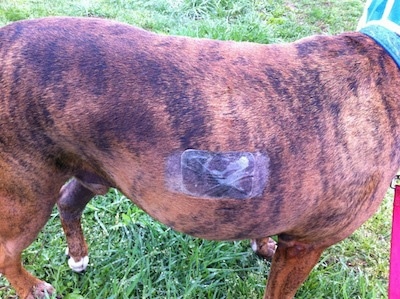 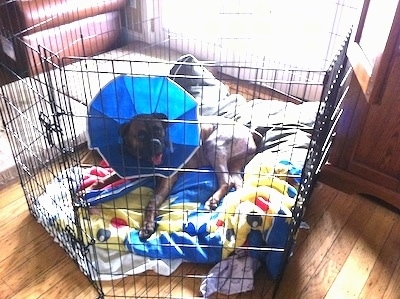 The day Bruno first came home and the day after were a little rough. He was in pain and getting him in and out to pee required the help of a sling and was very slow going. Bruno threw up a couple of times and his leg was a little swollen. By the third day, however he seems to be doing a little better. He can walk outside leashed to do his business without the sling, but he is still hopping on three legs. He is not whining the way he was the first two nights. He often will lie right on top of his operated on leg. I called the vet and they said that was normal for a dog with TPLO surgery to lie on the leg, and that the swelling and whining was also normal for the first few days. He continues to get a cold wet towel on his leg to help with the swelling three times a day. 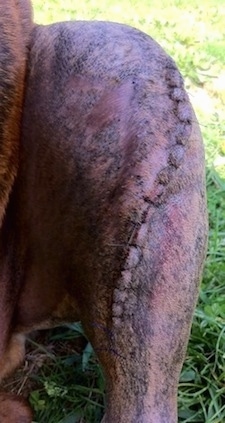 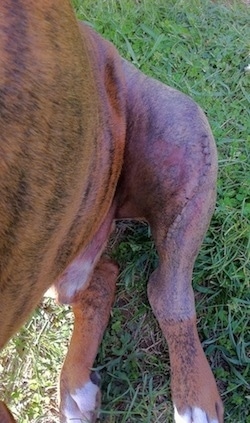 Bruno is still a bit swollen around his ankle area. I am noticing that he will put a tiny bit of weight on his leg while doing his business or preparing to lie down. He will also lie on top of his operated on leg, with his good leg face up. These are indications that he is feeling better, although he is still not using the leg.

The swelling in Bruno's ankle has gone down. I can now see the definition of the bones in his foot. Bruno does not seem to mind spending the day in his x-pen. His pain medicine makes him tired. When I walk him out to do his business and bring him back in he heads right for his pen and lies down. So far I have only given him half a sedative three different times when he became restless. He is a good boy when I apply the warm compresses. I fill up a bowl with warm water, dip a washcloth into the water and lay it on top of his leg. He will try and lick it, but listens when I tell him no and ask him to lay his head back down. 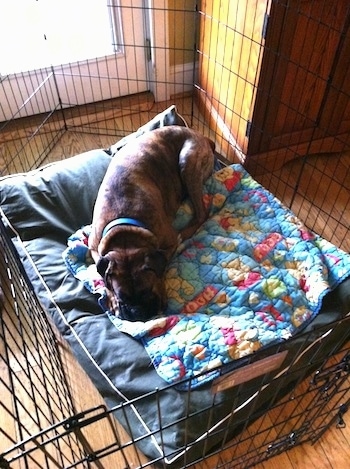 Two weeks after Bruno's TPLO surgery on his knee his stitches came out. That means no more hoodie, but he still needs to take it easy until his bone heels. The sedatives have been helping to keep him calm. Without them he is very alert and wants to go outside and chase things; a big no-no after this type of surgery. His kid brother, Spencer the Pitbull play-bowed to him through the pen bars trying to start a play session. I don't think so, pup. You'll never get your big brother back playing if you don't let him recover. Let’s go for a walk. Yes I know it's pouring rain but I have to calm you down somehow.

After three weeks Bruno is starting to use his leg more. Here is a clip of him doing his morning business. It shows how he will now squat without hesitation and he will lift his good leg, putting all of the weight on his operated on leg. He will still hold his operated on leg in the air at times and he does still have a limp. Bruno spends the days in his x-pen next to where I work with a bone to chew. He is not allowed to have free roam of the house and must always be leashed when he is out of his pen to make sure he does not injure himself. I take him out to do his business and sometimes we will sit outside together in the sun for short amounts of time so long as he just lies down next to me and relaxes. In two more weeks he goes back to the surgeon to get his bone x-rayed to see how it is healing. He has been getting a morning and evening sedative to keep him calm. I don't think it would be possible without them to keep him in a pen for that long without exercise. 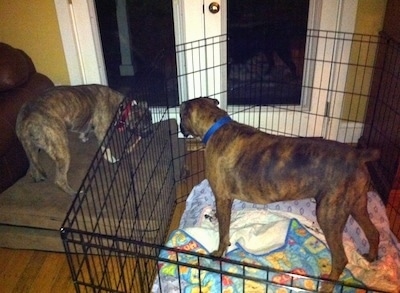 Oh my, Bruno! Calm down, vet’s orders! You must be feeling better.... Bruno was lying down in his pen. Suddenly he stood up and did a play-bow to Spencer and just held the position, staring at him. Spencer was lying down in the bed next to Bruno's pen. His tail started to wag and he stared back at his big brother, still lying down. Suddenly Spencer made a small move to the side, mischief all over his face. Bruno curled his entire body as if his tail was about to touch his face, then he jumped up and rammed into the side of his pen trying to play with Spencer. "Hey! Hey! Hey! I don't think so, boys!" I looked at the time. It was dinnertime and time for another sedative. I was told his body would build a tolerance to the sedatives and I would have to slowly up the dosage to keep him calm long enough for his bone to heal properly. Four more months to go. This is feeling like it is really dragging out. I am glad he is feeling better, but the vet said this would be the hardest part, keeping him calm when he starts to feel better. I think they were right about that. They said he would still have healing to do.

Busted on the Web Cam Four and a Half Weeks 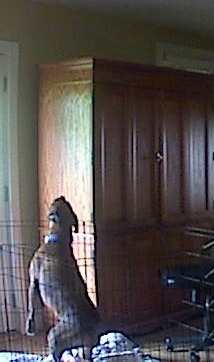 Check this out, busted on the web cam! Bruno heard a noise outside and while inside his pen went into guard mode. He jumped up in the air like a bear as he barked; a big no-no. Bruno, Buddy, pipe down! You're going to hurt yourself!