We are now into week two. Bruno's second week instructions are as follows:

Bruno had his first session of physical therapy today. He was put on a water treadmill. Bruno's progress report states, "Bruno did great! He grasped the concept of the treadmill very quickly. He walked at 1.3 mph for 20 minutes."

Bruno already knew how to walk on a treadmill and loves using them. The only obstacle he had to face was doing it in water. The vet tech states that he hesitated at first but then did just fine.

Bruno walking after his ACL surgery was performed a week ago. His leg no longer needs to be bandaged up so long as the cone stays on so he cannot lick or chew the staples out. We only take off the cone when we are standing there watching him, for example when he eats and sometimes when we walk him out to do his business. Bruno walks on his leg more and more every day. He is not allowed to run yet and must always be leashed.

Bruno had his second round of water therapy. His progress report states, "Bruno walked at 1.6 mph for 20 minutes in the underwater treadmill. He is using his leg 75% on land and 90% in the treadmill."

On day 12 Bruno is walking very well, however his staples have become red and irritated. It was back to the vet to get them checked. Bruno has had a cone on so he has not been licking them. There is a chance that a certain little Pitbull brother did some licking for him, however we are not sure of this. 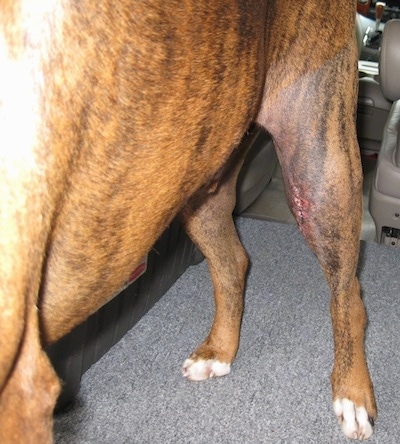 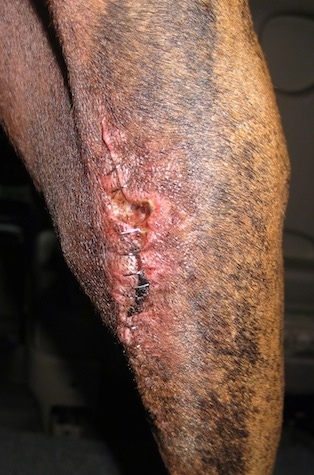 It looks like there might be a staple missing. Either that or his skin has simply stretched. The vet who performed the surgery was not in, but he was looked at by another vet and was prescribed Clavamox (a wider spectrum antibiotic) twice a day along with a Douxo Serum Calm Gel (an antiseptic spray). The vet was hesitant about wrapping the leg as it needs air to heal properly. Bruno goes back to the vet in three days. 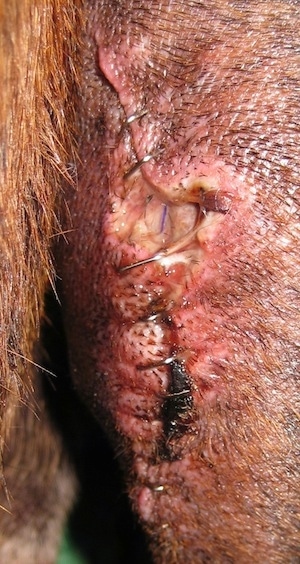 I decided to take a look at Bruno's staples before going to bed. He was lying on his side with his bad leg on the bottom. I noticed that his belly was resting on the exact spots on the top of his knee that are red and irritated. As I peeled his belly away from his knee I noticed it was damp and gooey. That explained why that part of his knee did not ever seem to dry out. Bruno would lie like that most of the time and his belly was not allowing any air in. I told him to get up and I directed him to sleep on his other side with his bad knee up. This did the trick and his belly was no longer suctioned against his wound. Now I have to keep an eye out and try to keep him from lying with his bad leg down to keep his belly from covering up his staples. Spencer just may not have been the cause after all 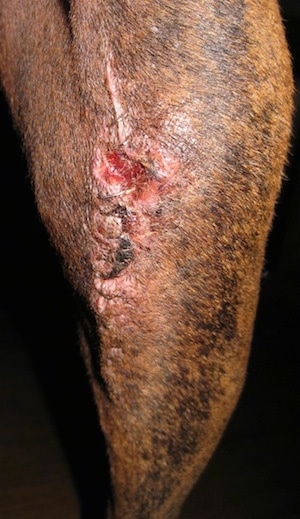 At 4:20 a.m. I saw on the puppy cam that Bruno was trying to scratch his head with his bad leg. His cone was on so he was not satisfying his itch. He had been lying with his bad leg up, so air was able to get to his staples, but now he stood up and lay down the opposite way with his bad leg down. Now his body was covering the wound. I got up out of bed and scratched his itch for him all over to make sure I hit the spot. Then I encouraged him to stand up and sit with his bad knee up. It took a while for us to get it right but when we did I gave him a back massage making sure I scratched under his cone a few times. 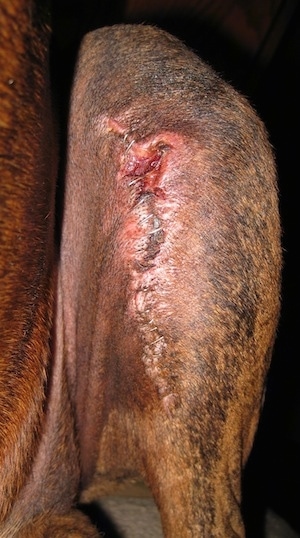 Now that I have been encouraging him to not lie in such a way that his body covers up his staples they are starting to scab over.

Bruno walking on his leg on day 13. He uses his leg most of the time. We do not allow him to run and he is always leashed when outside just in case he decides to chase something. I had taken his cone off just for this video. When we went back inside I put it back on him.

Bruno's staples on day 14 (day 1 counted as the date of the operation). Bruno has a vet appointment in the morning to get his knee checked. 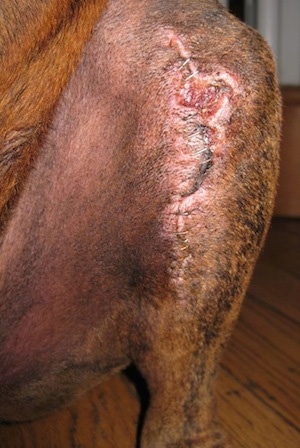 When Bruno sits down it really stretches out the skin around the area where his wound opened up. The good news, however is that Bruno is walking very well on his leg. Better than he was before his ACL operation.