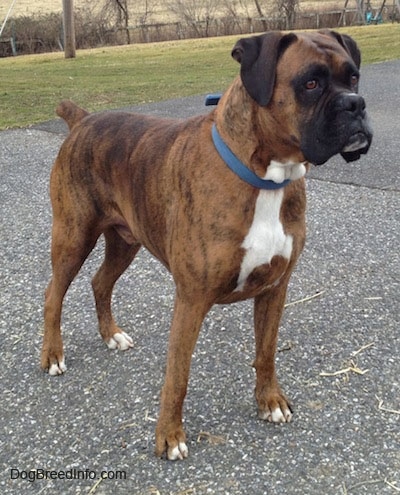 Bruno continues to recover well from his knee surgery. He is still not ready to have all-out play sessions outside with his brother Spencer the Pitbull, but he is able to go for long walks and play indoors where he will not take off running full speed.

Bruno had another oncology appointment and unfortunately two more mast cell tumors have emerged. They decided to treat them with medicine rather than surgically removing them because they said there may be more that are about to surface that we just cannot see yet. I asked if we should get an ultrasound to see if it spread beyond the skin surface and the doctor said no, that it was not necessary.

His official report reads as follows:

Bruno has aspirates done of masses on his left chest and right dorsal chest. Mass cells were seen on both aspirates. We are going to use level one treatment, which is shown below. 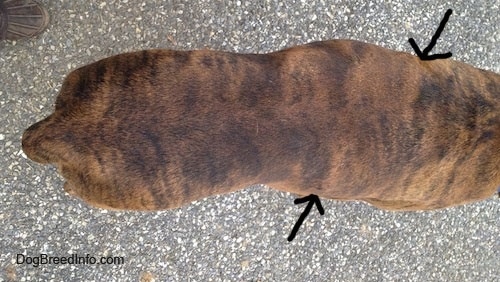 The picture above shows the two tumor sites. The one on the right is larger and lower on the belly; the tumor on his left side is higher up near his shoulder blade. It is not wise to touch the tumor sites unless you have to, because it can make the cancer spread. 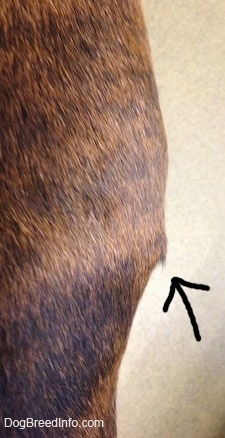 Larger tumor on the right side

Bruno is due to go back to the oncologist in two weeks for a recheck.

I decided to get a second opinion on the decision to not remove Bruno's tumors. I read that leaving the tumor intact along with the use of Prednisone only has a 20% success rate. If the cancer has not metastasized (spread to the organs), removing the tumors has the most optimistic prognosis. Bruno will get a full work-up, including an ultrasound and blood work, to see if the cancer is local to his skin or if it has spread to other parts of the body. If it has not spread we are going to go ahead and remove the tumors before it does spread. 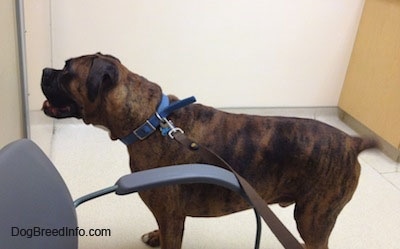 Bruno at his appointment looking at the door—he hears voices coming from the other side and it is making him very happy. He is working on keeping his "wiggle-butt" reputation. "There are people out there and they just might be here to see ME! In here, I'm in here! All are welcome!"

Bruno's ultrasound and blood work came back indicating that the cancer did not spread. The tumors were labeled stage one. Both mast cell tumors were cut out. They are being sent away to the lab to get their margins tested, meaning they test around the edges of what was cut out to see if they got all of the cancer. If the edges test cancer-free that means they got all of it.

He is back at home, resting comfortably.

Bruno's home instructions say he may not have his first bowel movement for up to 72 hours (3 days) because of the anesthesia, however as soon as we walked out of the vet's office Bruno headed to the grass. He peed for what seemed like minutes and then pooped. Seems he is not going to have a constipation problem.

We had to get his x-pen back out as he is to have restricted activity for the next 10 days. That means no walks and certainly no playing with Spencer his Pitbull brother. Activity restriction entails no running, jumping, stair climbing or playing with any other animals or small children. He is only allowed outside to use the bathroom on a leash. He is not allowed to be free to roam the yard.

Bruno's medications are as follows: 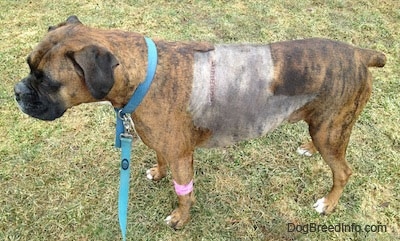 Bruno has 14 stitches on his left side... 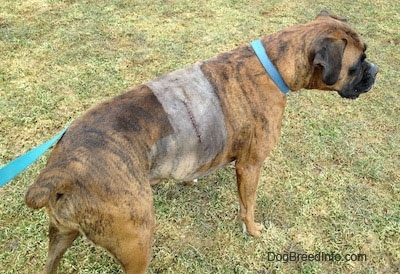 Warm compresses are to be applied to his incisions 3 to 4 times a day for 10 minutes at a time for the first 3 to 5 days. He is not allowed to lick, scratch or chew the sutures.

The ultrasound by chance found that Bruno's liver is smaller than it was at the last ultrasound. The report reads:

Liver: Lower limits of the size and echostructure. The gallbladder has 20% of its volume filled with echogenic, mobile luminal bile in a non-inflammatory, non-mucocoele conformation. The intrahepatic, cystic and common bile ducts are normal.

This is believed to be caused by the Prednisone, which often affects liver enzymes. Bruno is being weaned off of the Prednisone and is going to get an Actigall treatment to raise his enzyme levels. 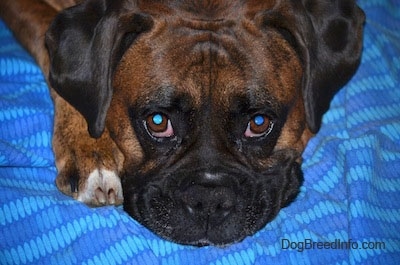 Bruno is on Ursodiol for his Actigall treatment and a supplement called Denosyl to help raise his liver enzymes. The Ursodiol is to be given with food twice a day and the Denosyl is to be given on an empty stomach at least one hour before he eats.

Bruno is back to his normal, happy self since the mast cells were removed.

Bruno's biopsy results came back on the cancer tumors. The tumors had very wide margins, meaning the chunk they got out around the tumor did not have any cancer around the edges. There was a lot of thick, clean, cancer-free flesh around it. This means all of the cancer was removed. The tumors were labeled as grade two because there was more than one tumor. Mast cell tumors always run the risk of returning. Something in Bruno's immune system does not know how to handle his mast cells. We are praying they do not return anytime soon.

Bruno's stitches are out and we met his new oncologist. The doctor confirmed that Bruno's tumors were low grade and had not spread. He explained that the tumors are not related to one another, meaning they were not caused by spreading from one area to the other, but rather individual tumors. He believes that in dogs where the tumors are low grade and have not spread past the tumor site that it is best to surgically remove them before they do spread. This is very common in both Boxers and Pugs. He did not feel that Bruno needed to be on a steroid or any other type of cancer medicine at this time. Bruno is going to be checked by the oncologist every 3 months and we are to check him at home often for any type of lump. Any lump that forms needs to be aspirated and tested.

Additional information:
Today we had the opportunity to discuss the grades of mast cell tumor and the prognosis with them. Bruno is fortunate in that he had a low grade II mast cell tumors and they were completely excised with good margins. I expect Bruno should have a good prognosis relative to this tumor but it is a low risk for regrowth or other tumors; I would like to recheck him in 3 months to be sure everything is going well and we have no areas of concerns to be sure.

It was a pleasure to meet you all today, I look forward to seeing you at his recheck appointment.