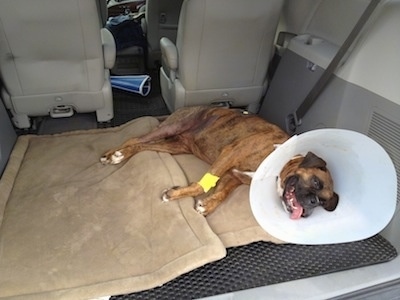 I picked Bruno up from the vet. He was in good spirits but in a lot of pain. The vet tech and I helped him into the van using the dog ramp and a sling. With the two back seats out there was plenty of room for him to lie down. It was tough for him to get himself situated but he managed to lie down too close to the door that still needed to be closed. I was able to slide his body into a more comfortable spot that allowed the door to close. 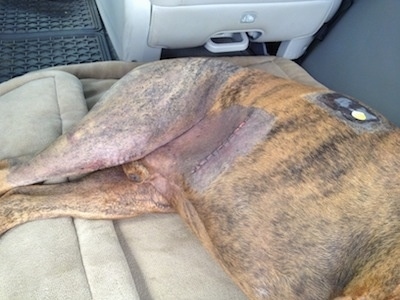 Bruno has 11 stitches from the mast cell tumor that was removed on his side. This tumor was cancerous and at least 3 cm around the tumor had to be removed. He has 15 stitches down his right knee for the TPLO surgery. The area you see higher up on his side with the yellow circle is a Fentanyl patch used for pain management. It is to remain on him for 4 more days and then we are to take it off. He has an oral pain medicine that will replace it. 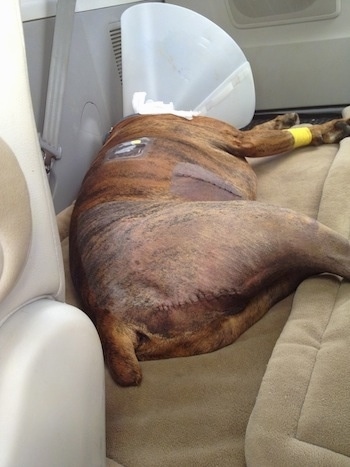 Bruno has 13 stitches down his back right leg where the other cancerous mast cell tumor was removed. It also is a very deep cut. At least 3 cm around the tumor had to be taken off. The tumors were sent off to a lab where they will be tested. They will be testing around the edges of the mass that was removed to see if they are clean of cancer. They will also be testing to see what phase of cancer the cells were in. 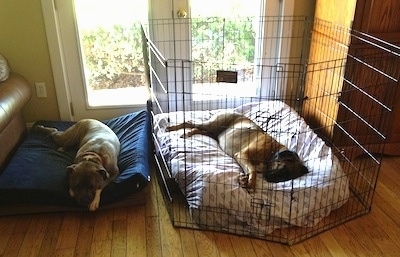 Bruno will be spending the next several months confined to his x-pen as he recovers. His bone was cut and adjusted in his knee area and this needs to heal before he is allowed to resume normal activity. The hardest part of his recovery will be when he feels better but is still restricted because his bone is not completely healed. We were given sedatives to keep him calm. Bruno will have to wear a cone when he is not in my sight, but since my computer is right next to his x-pen I allow him to be cone-free while I am at my computer. He will have to wear the cone at night. I may sleep next to him on the couch, but he will still have to wear the cone because if I am sleeping I am not watching him.

Poor Spencer will have to find someone else to play with.

Sweet potatoes also have an alkaline effect on the body making them a good treat.

The cold compress is used to decrease pain, inflammation and swelling associated with the surgical procedure. It is to be applied 4 times a day for 10 minutes for the first 3 days post-surgery.

The warm compress is used to increase blood flow and circulation to relax muscles in the area to facilitate muscle stretching. After the 3 days of cold compresses, apply warm compresses 4 times a day for 10 minutes for 2 weeks.

Rules for Confinement for TPLO

Bruno is lying on his dog bed inside his x-pen. He is calm but you can tell he is in pain. He is whining and breathing quickly every so often. He still loved his dinner and ate every bite. He also drank some water.

Bruno started whining even more. I asked him if he wanted to go outside and he perked up. Yep, Bruno had to pee. His stools are loose. Thankfully it's not diarrhea loose though, more like pudding. I put a sling under him when I take him out to go to the bathroom in case he falls over. When he walks he uses his operated on leg with a big limp. When he stands he holds it in the air. He is now back in his bed resting. He is breathing a little heavy and whining slightly every so often. This is one painful double surgery. I am glad that the two incisions for the cancer and the incision for the knee are all on the same side so he can lie on his other side without having to lie on any wounds.

Bruno is still in a lot of pain. Every so often he will begin to whine, but seems to be a little better than the day before. I got him up and outside to do his morning business. He was a little wobbly on his feet. He took his medicines inside a pill pocket with no problem and lay nicely while the cold compresses were applied to his knee. He did not want to drink any water so I syringe fed him some. I started to get a little worried about him not wanting to drink. Hmmmm, will he eat his breakfast? I asked him, "Bruno, are you hungry?" Bruno perked up and looked at me and his nub of a tail started to wag. I prepared his food, adding a little water to it in order to get more liquid into him. 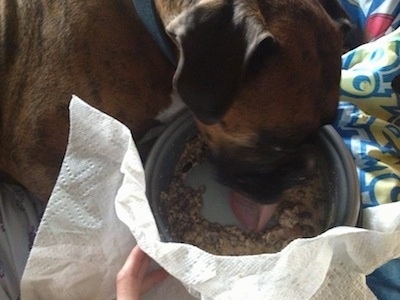 I put the food bowl in front of him and he adjusted his body to he could reach it and started to lap it up. Little bits of food began to fly, landing on my arm, shirt and on his dog bed. Oh Bruno, that big tongue of yours is making a mess! I got some paper towels and made a barrier to stop the food from landing all over the place. Sitting up was a chore for him, but there was food involved! 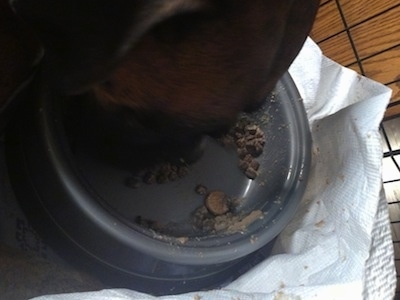 Notice the food stuck to the side of the paper towel. What a mess, but he ate it all, including the joint supplement I tossed into the bowl.

Bruno's sedatives are on an as-needed basis. I was going to try and see if I could get away with not giving him one since the Benadryl makes him sleepy, however Bruno was very restless and visibly uncomfortable. He had already had his dose of pain meds a couple of hours ago and is not due for more for a few more hours. Buddy, you have to relax. I decided I better go ahead and give him the sedative to help him calm down. Bruno's stools are still loose. I have been giving him sweet potato chips with the medicines that need to be taken with food. They will help in hardening up his poops, which are still loose from all of the medications and anesthesia.

On the third day post-op Bruno is still in pain and a bit uncomfortable, however he is feeling a little better every day. Day one and two were the worst; he was very wobbly and would cry a lot with heavy breathing. On day three he whined a little, but not as much as the first two days. He will often lie down right on top of his mast cell tumor stitches and his newly operated on right knee. It kind of creeps me out to see him do that. He did the same thing when he had this left knee fixed and I had called the vet to see if it was OK and they said it was. It goes to show that Bruno is certainly not dwelling on his injuries. If I had tumors removed and my knee operated on where they cut the bone, rotated it and cemented me back together with a metal plate you would not catch me lying on top of my injuries! Pain or no pain, it just would not seem right!

Bruno's stools are a little firmer, but they are not back to normal yet. He has no problem taking all of his medications. Bruno eats anything. 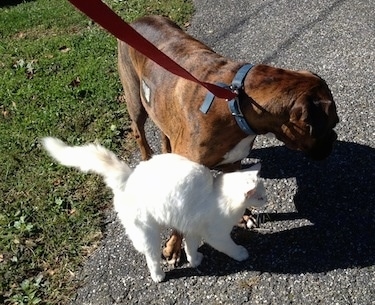 This is Bruno on day three post-op after his double surgery. He is being walked out to pee and there's that darn Kung Fu Kitty who still won't leave him alone.

This is Bruno and Kung Fu Kitty 4 years earlier.

Bruno spends most of his day sleeping inside his x-pen. He is walked out to do his business and then put right back in to rest. The first couple of days just getting him out and back in was a lot of work for him. Now that he is feeling a little better he is playing some mommy trickery. He stands up in his pen letting me know he wants to go outside. I take him out to pee and just when I think he is going to pee he lies down in the sun. I had Amie fetch me a lawn chair and I sat outside with him. He was still on a leash. I am not about to leave him for a second. If he decided to suddenly run after something it could to some horrible damage to his knee.

Bruno's morning stool was back to a normal consistency.

This is Bruno 4 days post-op being walked out to pee. He is and has been using his leg, but you can tell it hurts him to step down on it. We have to walk very slowly and he will stop and rest a few times along the way. Those darn cats love him so much they won't leave him alone! That is Mini near the end of the clip rubbing all over him. Bruno is a good sport and puts up with it. We have been keeping Spencer his Pitbull brother well exercised with long walks so he is calm around Bruno. 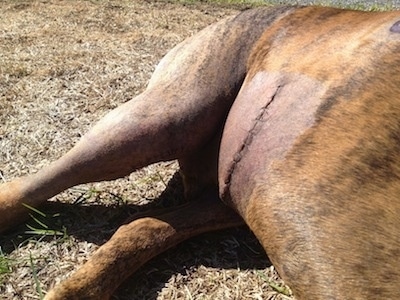 This is Bruno's right knee where he had the TPLO surgery and his right side where a mast cell tumor was removed. 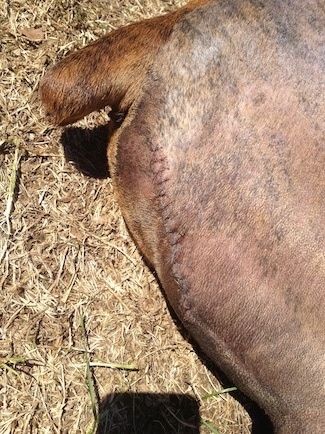 This is his right back end where another mast cell tumor was removed.

Bruno's Fentalyl patch comes off today. He will now be getting Previcox as a pain reliever replacement along with his Tramadol.

Bruno drank a ton of water the first part of the day. More so than normal. He seemed to be very thirsty. At one point he got up inside his x-pen as if he had to pee. I got out his leash and walked him out and he went straight to the water bowl on the porch and drank. He never did pee. When he came back inside he went to the kitchen and drank more. When he was brought out of his x-pen to eat his breakfast he left his food and headed for the water dish! Oh Bruno, could you have been dehydrated and are now feeling well enough to drink? I would bring him water in a bowl while he was in his x-pen several times a day and he is always offered a drink when he is brought out of his x-pen. I was even syringing water into his mouth when I thought he did not drink enough. For the first few days after surgery he was not all that interested, only taking a few laps or refusing altogether. Bruno boy, I think you overdid it! He spent the next few hours refluxing water back up. Little bits of food would come up but it was mostly just water. Today he just wanted to drink and drink he did.

Bruno was in good spirits today. I held off on giving him his sedative for as long as I thought it was safe to do so, but when he started hopping around with a bone inside his x-pen I knew it was time. Bruno boy, six days is not long enough to be that frisky on your leg.

Bruno was diagnosed with stage two cancer of his two mast cell tumors.

Bruno's mast cell tumor biopsy report came back and they said the margins were clean, meaning there was no cancer on the border around the tumors they cut out. This means all of the cancer was removed around the tumor sites.

There are four stages of mast cell tumors: