The big day came and Bruno was dropped off at the vet in the morning. The surgery was performed that afternoon. Bruno spent the night and was picked up the next day.

I made sure the rest of the pack was good and tired. We all went for a few long pack walks the day before and the day of to help the rest of the dogs stay as calm as possible for Bruno's arrival back home.

The instructions for his care for the first week are as follows:

Bruno will attend four 30-minute rehabilitation sessions at the vet’s office where they have an underwater treadmill that he will swim in to get him to use his leg again. 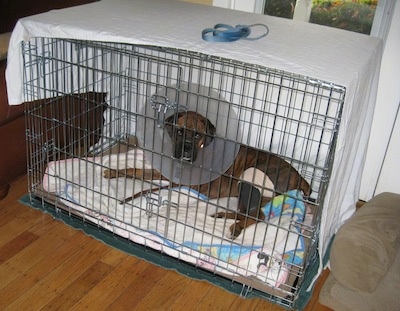 Spencer stayed home when I went to pick Bruno up. Before coming into the house I walked Bruno so he could go to the bathroom. I then got him settled in his crate before letting the pup out of his own crate. 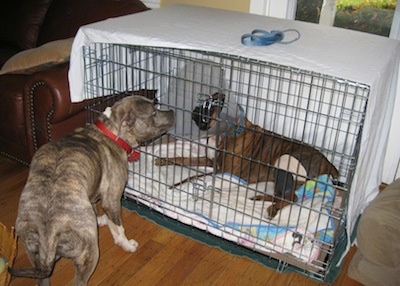 It was a good thing I had because Spencer was so happy to see his big brother he danced all around him. Had Bruno been out of the crate we would have run a chance of Spencer stepping on or bumping his knee. 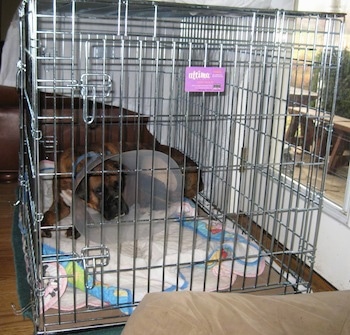 I prepared Bruno something to eat. He had not eaten since the night before the surgery. I needed to get something into his stomach so I could get some pain meds into him. 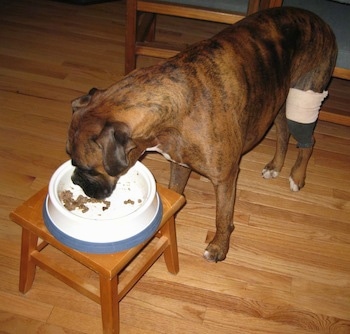 I took off Bruno's cone while he ate. His food was placed on a stool so he didn't have to reach all the way down to the floor. 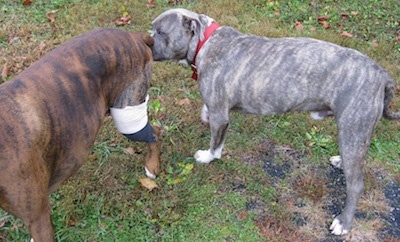 Bruno was walked out on a leash to go to the bathroom. I allowed the pup to smell all of the odd smells that were all over his big brother. 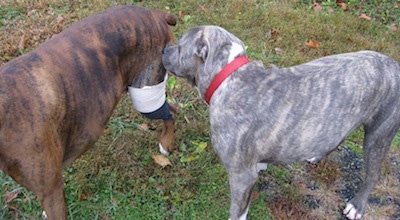 The pup sure did get a nose full. 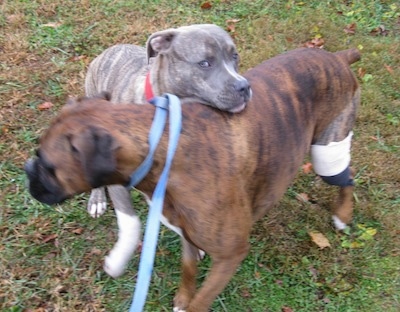 When Spencer attempted to play with Bruno he was immediately stopped, "Atttt! Leave it!" I asked Spencer to give Bruno space by stepping forward, pointing and giving him one of my "I mean it" looks. Like a good pup he listened and backed off. Spencer looked at me for direction and we walked back into the house. 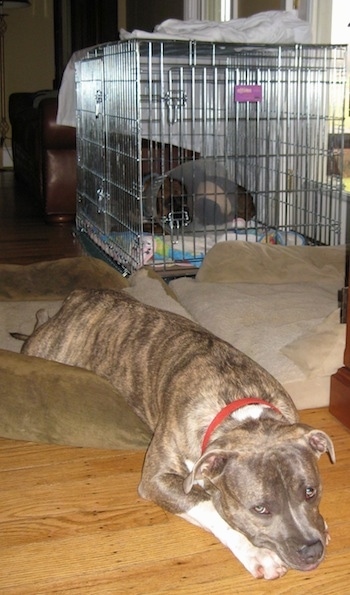 Bruno's cone was put back on and he was settled back into his crate. The pup lay down and went to sleep. The long walks we went on before Bruno came back home had paid off.

Bruno is on Tramadol for pain, Zubrin for pain and inflammation and Simplicef, which is an antibiotic.

The morning of day three—Bruno is walking on only three legs. He had yet to use his bad leg. Notice how Spencer is still very interested in all of the new scents Bruno brought home with him from the vet.

Later that same night Bruno was outside being walked to do his business. I think he forgot what he was doing and acted out of habit because when he peed he put all his weight on the bad leg and lifted his good one. After that he must have realized the leg worked because he walked on it a few times. Not that much, but a little, and that was before I gave him the nightly pain pill. That is a good sign. When my vet does ACL surgery he also injects the knee with fluid and I think that helps.

Bruno was taken to the vet to get his bandages changed. After they were changed he came out of the vet’s office walking on his leg a little. He does not walk on it all day long, but does for short bits during the day.

The sixth day after his ACL surgery on his knee; the day of surgery is being counted as day one. Bruno seems to walk on his leg a little more every day, although he still holds it in the air about half the time. At this point Bruno is not being taken on any type of exercise. This clip was taken on the way back in from doing his morning business. 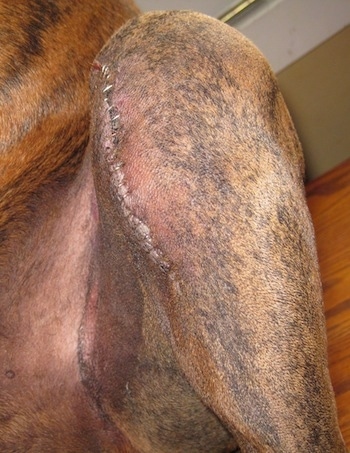 This is a picture of the staples in Bruno's knee on day six. They get taken out after two weeks.