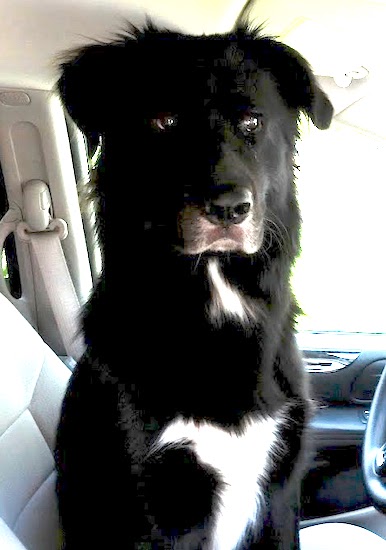 Bentley the Newfie Dane (Newfoundland / Great Dane mix) at 1 year old—"Firstly, I'll make it clear that Bentley is not only the best pet I've ever owned but one of the best things that ever happened to me. Now that being said, he did have times where he destroyed my valuable objects, disobeyed, got hit by a car, got lost, pissed other dog owners off, pissed on other dogs, pooped for a week inside the house... Chewed my clothes, drawers, toilet paper, homework, corner of the walls, Shed here, shed there, shed everywhere... ran all over the house muddy... Dig the ground in the backyard... Take the garbage can and spread all the garbage all over the house... eat lots and lots of chocolate from stealing food... bark and not shut up... make me fall off my bike... jump on people and scratch them... the list could probably go on..."

The Newfie Dane is not a purebred dog. It is a cross between the Newfoundland and the Great Dane. The best way to determine the temperament of a mixed breed is to look up all breeds in the cross and know you can get any combination of any of the characteristics found in either breed. Not all of these designer hybrid dogs being bred are 50% purebred to 50% purebred. It is very common for breeders to breed multi-generation crosses. 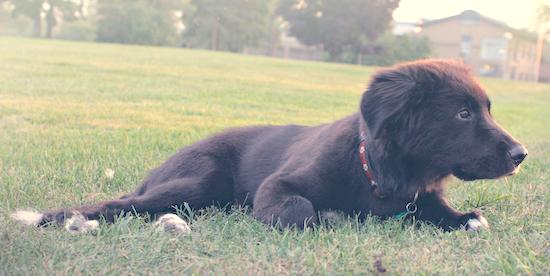 Bentley the Newfie Dane (Newfoundland / Great Dane mix) as a puppy—"So how is he the best thing that ever happened to me? Well let me start by how I ended up getting Bentley in the first place. I always wanted to have a Malamute or Husky. I guess a wolf looking dog that's almost independent but is going to obey me most of the time yet think independently. However after meeting a very friendly Bulldog I realized I could forget about the looks to some extent and stick with personality. I still wanted a large dog though. Maybe Bulldogs being an exception. When I first saw Bentley he was running around off leash, without even a collar in his owner's front yard, but he listened very well when he was called and he gave me a shy then friendly welcome. I guess so far he seemed like a well postured, almost classy, polite little puppy." 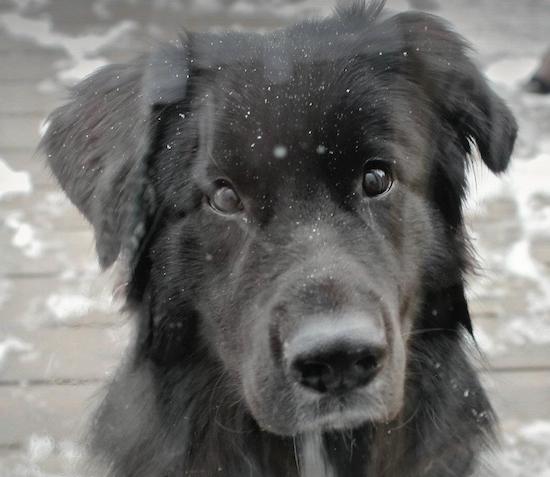 Bentley the Newfie Dane (Newfoundland / Great Dane mix) at 1 year old—"That's when I got introduced to his name "Bentley". Then the owner started talking about him and I met his giant dry-mouth Newfoundland dad. And heard a little about Bentley's parents. Apparently dad had been a loyal big fellow who only went on walks until the end of the street then sat. You can't do much once your 120lb dog sits and doesn't move anywhere but home. Mom on the other hand was more energetic, playing fetch at the cottage while Dad laid down in the shade and watched her play. Bentley was a five month old runt and he knew basic commands. The owner wasn't sure how smart he was. So anyways after sitting with Bentley and not finding a single reason not to have him, I took him for $200. At first he was very shy and preferred women and children but as he grew older he started getting more playful and energetic." 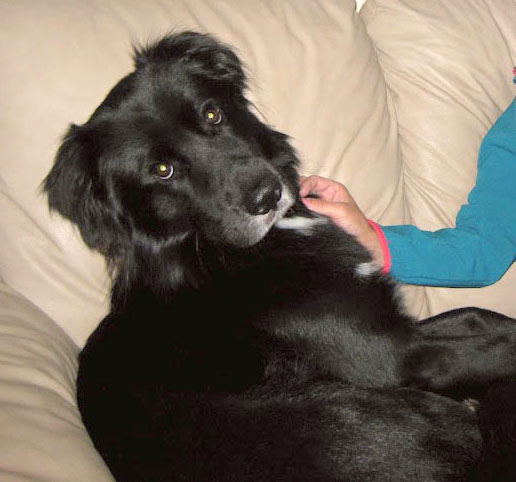 Bentley the Newfie Dane (Newfoundland / Great Dane mix) at 1 year old—"Bentley learned around all the tricks I wanted to teach him in the first month, but most of all, he learned the family. He knows exactly how to treat each person he knows to get the most he can out of them yet keep them happy. Every day he does something new that surprises us. He's extremely affectionate and loyal but does have his own unique qualities that could be troublesome to some people. He eats his food slowly, chewing as he bites which makes him a very picky eater. He prefers spicy wings to plain ones and likes his food warmed up and right out of the fridge. If he sees our food is way better, he refuses to eat to get some of our food and sits politely beside his food bowl, hoping to get a bone or piece of steak. If he doesn't get anything though, he won't go too far, he will settle with eating his own dog food. But his appreciation of better human food and refusing less tasty human food makes it really hard for me and my family to not give him our food. He also knows too well what is expected of him without ever getting any actual training of it. It's impressive how well he knows what to do or not to do considering the lack of consistency in our demands. For example he knows not to jump yet knows to jump when asked, Or to welcome my dad by jumping on him but welcome me without jumping on me so instead he jumps in the air and kisses my cheek without pushing me or anything. He's done millions of things that just made my day. He was there laying beside me, when I was sick. He has walked beside me in the rain off leash without being asked. He is the one to pull my bike to my friend's house and always be a polite guest, making sure everyone is happy. He is a soft and fluffy bundle of joy that lays beside me when I'm typing and uses my thigh as a pillow. I've faced many challenges with him but they all got solved. The only thing I could not solve was correcting him from running to any dog he sees, because he learned to go sniff the other dog no matter what as long as the dog seems friendly which means when I finally catch up to him to tell him he's done something wrong, the other dog is usually just playing with bentley and the dog owner is usually super happy which makes it hard for me to say what Bentley had done was bad considering the evidence says otherwise to Bentley. So at the moment I'm just working on making him listen better to me off leash when there are other dogs around. I also wanna teach him to find things by their scent. Other than that he is the perfect pet for me. Maybe he's more of friend who is also my room-mate than a pet."