Raising a Puppy: The 13th Week in his New Home—Spencer the Blue-Nose Brindle Pit Bull

A day in the life with Spencer the American Pit Bull Terrier puppy. Spencer's 13th week—22 weeks old, 50 pounds, 19 1/2 inches from the ground to the highest point of the shoulders (the withers). 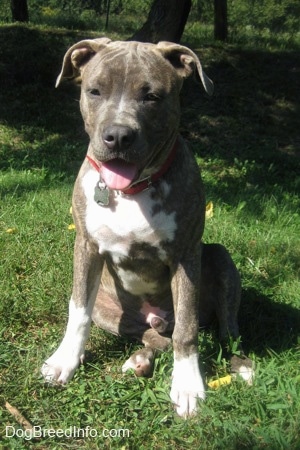 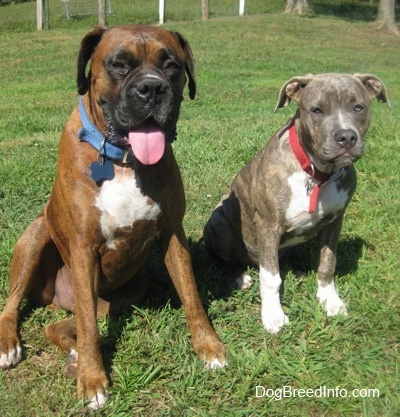 Sara caught Spencer up on the table, eating cat food. I am not sure how often he does this, but on mornings when he is outside for a while without a human he often does not want to eat his breakfast when he is let in to eat. Seems to me the pup just may be feeding himself breakfast! Time to try and catch the pup.

I had suspected Spencer of eating cat food since Sara once saw him up on the cat table, but I had since removed the bench he had used to reach the food. Even so, I had thought he may still be getting it because more cat food was missing than the cats could eat. This is usually due to the fox coming at night or big brother Bruno, but the fact that the pup often didn't seem hungry in the morning made me suspect the pup as well.

Well, the mystery of why Spence often did not seem hungry in the morning has been solved. Every morning Spence is put outside while I get dressed so he can do his business. This morning I had gotten up early and was already up and dressed, out in the barn tending to the critters. Well guess who suddenly showed up in the barn stall and started finishing off the Great Pyrenees's leftover food that I was about to pick up? You guessed it, Spence! Busted!

The little squirt has been squeezing under the back gate, helping himself to breakfast and returning back to the porch! It was not puppy food he was eating, but I suppose it was better than cat food.

The pup has grown so much I just didn't think he could still fit under that fence. Here is proof that I was wrong. 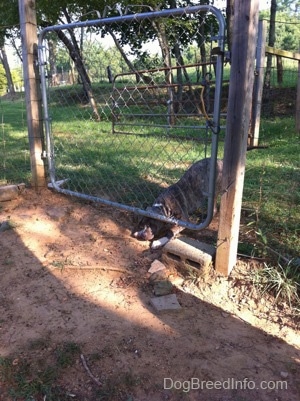 Looking at this pic it does not seem all that possible. 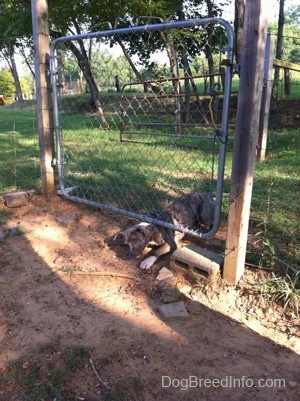 But wait! How low can you go?! 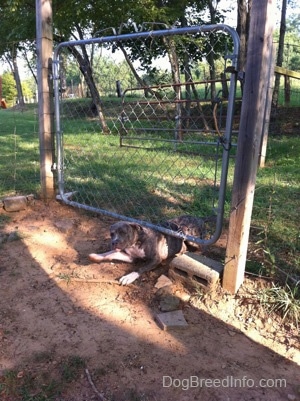 I don't see any room to spare from the ground to the top of the fence. That belly is surely getting a scraping. 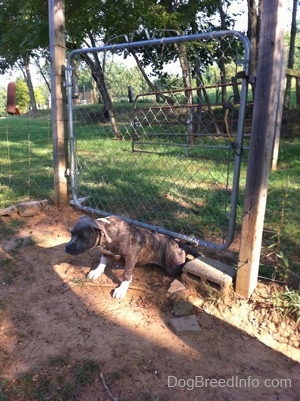 Jumping in the Van 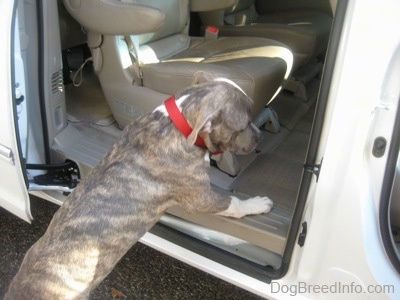 Spencer has been putting his front legs up and waiting for someone to boost his back the rest of the way into the van. I decided to teach him how to get a running start to show him he can jump in by himself if he really tried. I put a leash on him and ran with him up to the sliding door opening, "Up!" Spencer just put his front paws up again and stood there waiting for his boost. Come on pup, try harder. I tried it again, but this time I jumped into the car, "Up!" This time he jumped in! Good boy, Spencer! He was very proud of himself.

The next time we got into the car he slowly walked over and put his front legs up again. I got into the car and called him. "Come on puppy, up!" Spencer tried the jump and missed. He looked at me and made a playful bark. "Spencer, Up!" ;I was still inside the van. Spencer started getting frisky, but was not so sure about jumping in; the last time he had fallen back. We were heading out to meet friends for our pack walk and I decided to entice him with something else. I started saying the names of his doggie friends, "Spencer Up! Maggie, Darley, Tia." Spencer hears those names every time we pack walk and associates them with walking with his friends. The pup gave out a little bark and tried it again. This time he jumped right in. Boy, was he happy with himself!

We practiced again the next day. After encouraging him to jump into the van we practice one more time and he jumps in with ease. Good puppy. You are getting way to big to be boosted in. 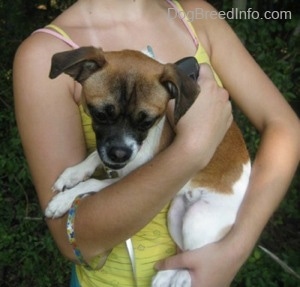 Scooby is a 2-year-old Chihuahua/Pug mix, also called a Chug or a Pughuahua. When Scooby first spotted Spencer and Bruno he barked and growled. He was being held and his handler put him on the ground. Dogs that are held when meeting another dog are more likely to react negatively. 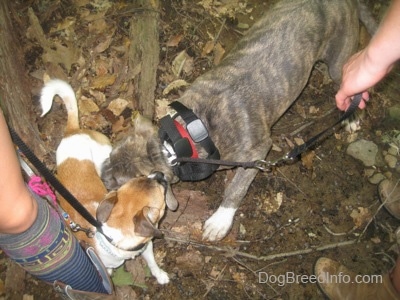 Scooby stopped barking and growling when he was put on the ground and only growled once more when Spencer became a little too excited. We corrected Spencer and asked him to calm down. Scooby is seven pounds and Spencer is 50 pounds. Therefore it does not take much for Spencer to overwhelm the small dog. 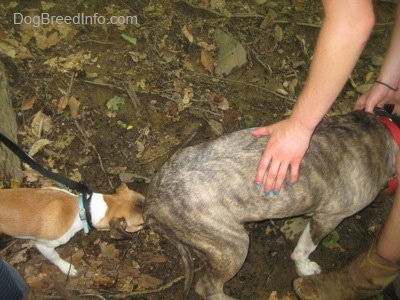 Scooby wanted to smell Spencer but he was too big and overwhelming so we asked Spencer to turn around and allow Scooby to sniff him. We calmed Spencer down by correcting him when he pulled toward or nosed too much into the little dog.

"Leave it, pup!" Time to walk and mind your manners. Scooby was also asked to heel on the leash so that neither dog would think it was above the other dog. 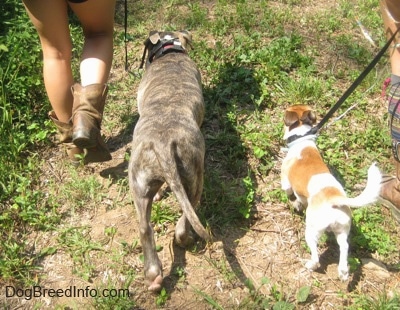 As soon as Spencer minded his manners and Scooby was asked to heel there were no more growls, and all dogs got along wonderfully. As for Bruno, we never had to tell him a thing. He smelled the little dog from a reasonable distance and never tried to nose his way in. He was calm even when there were growls. Good boy, Bruno. We were out on a walk through a small town when a bright blue and very loud motorcycle came speeding right past us on a quiet back road. Dogs see in shades of blue and yellow so this loud, fast, florescent blue bike must have stood out to the pup like a sore thumb. Bruno ignored it and Spencer tried to run away from it. I held the leash and just kept walking. There was nothing else to do since I could not bring the bike back for him to see that there was nothing to be afraid of. This put Spencer on guard. He was very aware of everything around him. I could tell he was looking at things with extra caution.

As we walked we passed a yellow backhoe parked outside of someone's yard. Spencer's eyes widened and he tried to pull away from it. Great, this meant we had to hang out here for a bit in order to show the pup this machine was not going to jump out at him. After passing about 20 feet from the backhoe we turned around and passed it again. I said nothing to the pup. Just kept walking, silently correcting any of his attempts to pull out into the road to get away from it. We walked back and forth four times. After the third time he just looked at it without pulling. The fourth time we passed he didn't even look at it. This meant we could now leave. Good thing, because I had just noticed someone peering out of the house at us wondering what the heck we were doing. Silly puppy, you are making your mommy seem like a crazy lady! 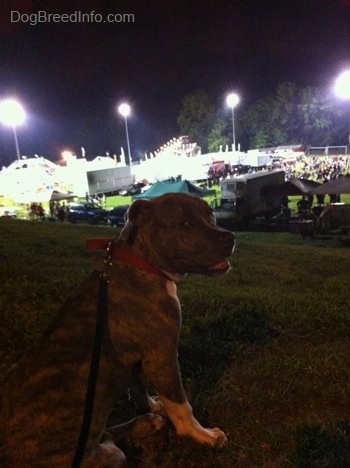 Our local park was holding their annual Labor Day fair. We wanted to take advantage of all the activity and expose Spencer to some action, but dogs were not allowed inside the fairgrounds. We walked the dogs around the outside. As we got closer to the band music speakers I could feel the bass vibrating my body. I noticed Spencer was shaking a little. He was feeling the beat for the first time in his life. Time to stop and enjoy the music to show the pup all was OK in the world. We sat on the hill. When some kids came running over to see the dogs we asked them to only pet Bruno. Now was not the time to love on the pup, because it would reinforce the way he was feeling. Amie sat with the kids and Bruno and I sat with Spencer. I didn't talk to him or pet him; just let him absorb all of the action below. After about ten minutes the pup’s body language told me we could move on. Spence was no longer tense and rather curious and happy about the action below. 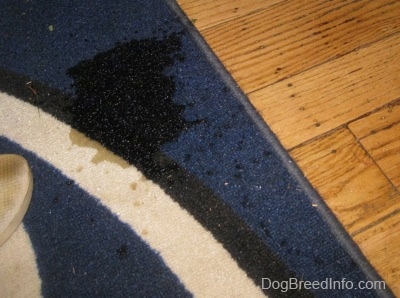 Oh Spence, you are not supposed to pee in front of the door! I had gone out for three hours and left the pup with one of the kids, who apparently did not let him out at all and did not see him standing at the front door. Spencer had gotten up, walked to the door and peed.