A day in the life with Spencer the American Pit Bull Terrier. 1 year 4 months, 79 pounds, 22 1/2 inches from the ground to the highest point of the shoulders (the withers). 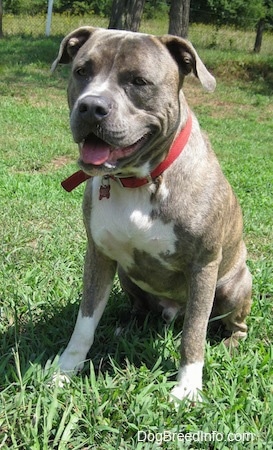 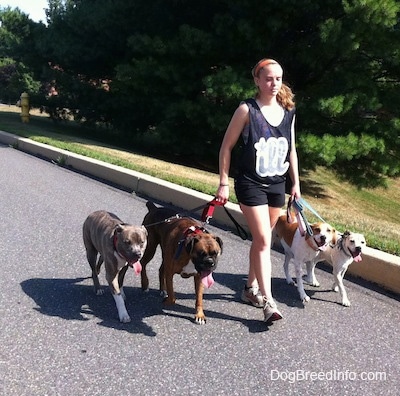 Pack walk: Spencer the Pitbull, Bruno the Boxer, Darley the Beagle mix and Maggie the Pitbull mix. Bruno was only able to do half of this walk since he is not fully recovered from his  second ACL surgery. He was picked up and driven back. 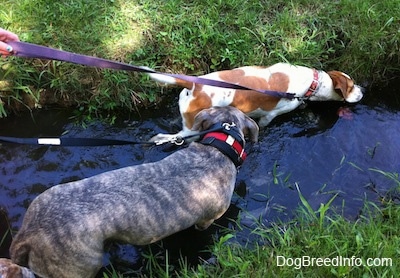 Spencer is so different than his Beagle friend Darley. Darley was rubbing her body all over the water, cooling herself off. Spencer went into the water but he seemed to be more careful about getting himself all dirty. 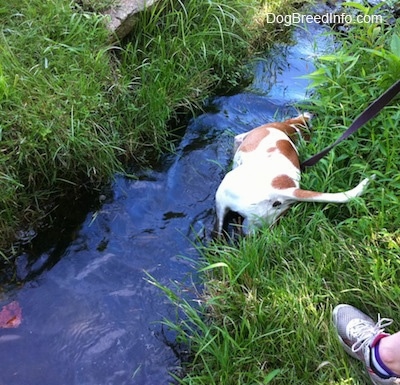 Darley the Beagle mix, on the other hand, practically rolled in it. 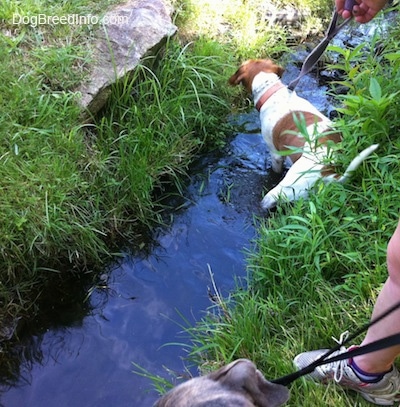 Darley has no shame in getting all wet and dirty. In fact, later that same day Darley found some horse poop and rolled in that, too. 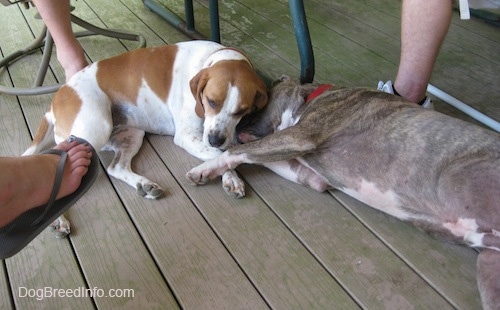 Spencer was at a picnic with his human and doggie friends. He nosed his way under Darley the Beagle mix and cuddled with her. 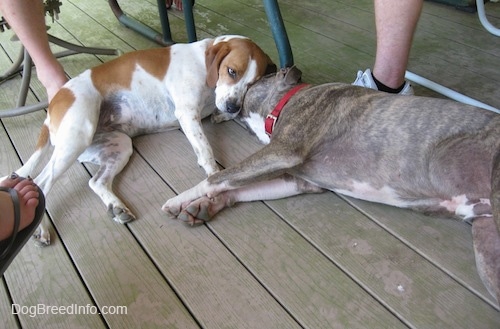 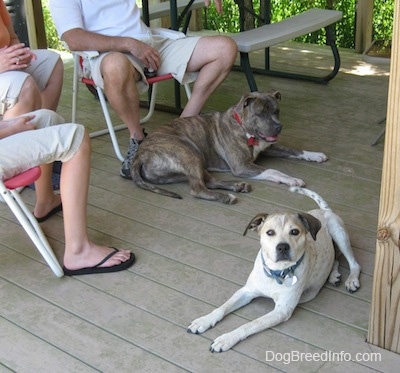 Spencer and Maggie the Pitbull mix. 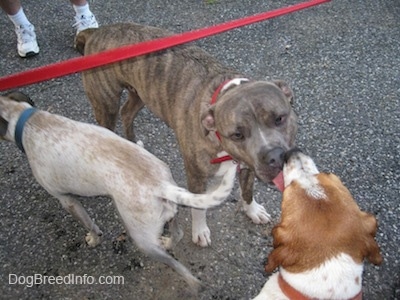 Oh there you go again with Darley, giving her a submissive kiss on the face. 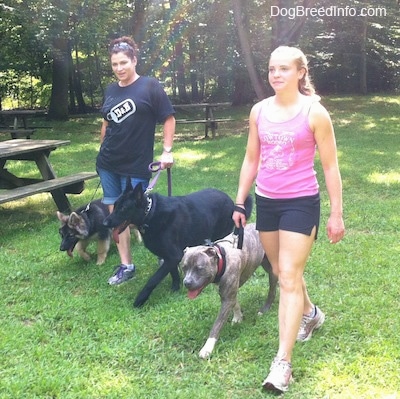 Spencer goes for a pack walk with two more friends, Shadow and Bowie the Shiloh Shepherds. Bowie is just 14 weeks old and his owner reported that Spencer's calm energy helped calm the puppy. The pup focused in on the walk, heeling very well on the leash.

Careful not to get Dirty 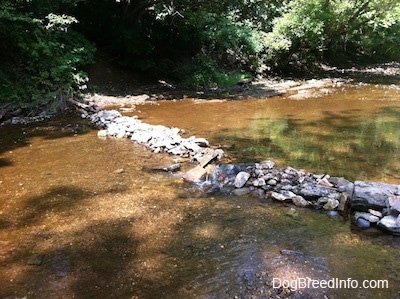 I have noticed that Spencer will avoid walking in puddles and muddy areas. We were recently crossing a stream on one of our pack walks with his big brother Bruno the Boxer. I had both Bruno and Spencer on leashes and was crossing the creek by walking on top of a rock dam that someone had built. I had my sneakers on so I stayed on the rocks so I would not get wet. I noticed that Spencer was right behind me on the rocks, being careful not to get his paws wet or muddy. Bruno, on the other hand, had just trudged through the water not caring about any muddy areas. Spencer is definitely more careful and much more aware of his surroundings. Bruno the Boxer will roll in a mud puddle if he is hot, where Spencer will go out of his way to avoid stepping in it. Spencer goes in water all of the time. He loves swimming in our pond and will walk through streams, so it's not that he does not like water. The day before this creek crossing we were at another park where there were rocks surrounded by gooshy mud. Bruno just walked in the sinking mud, Spencer jumped the rocks. Spencer seems to just prefer to stay cleaner. Unless it's poop, of course. He never minds rolling in poop. Oh, and dead animals. He loves to roll in dead animals. Just don't step in the mud! Go figure!

Spencer and the baby

Spencer is very tired but he gives up his bed for the 16-month-old baby. Spencer just loves babies and all kids. We as his owners had to teach him to respect small kids. He could easily knock them down, but he has learned to be gentle. In the video, I bent down to look at Spencer: he had gotten up and walked over to me to give me some face licks.

Spencer shares his toys with a 16-month-old baby. He had just been told not to lick the baby's face or push into him with a happy dance. At one point Spencer gets distracted by the scent of the baby's diaper and needs to be reminded to give the baby space. A sound correction does the trick. We asked him to remain calm and he gives a couple of tongue flicks that showed me it was a challenge for him.

Spencer and Bruno spend the day at Knoebels, the largest free-admission amusement park in the USA. The park has great rides at reasonable prices and is very family oriented. But the best part is dogs are allowed! Spencer and Bruno love being at Knoebels. They are both excellent with all of the activity, sounds of the rides, other dogs and people everywhere. Nothing seems to faze them and they mind their manners wonderfully. They lie down and wait while the kids are in line for the rides. 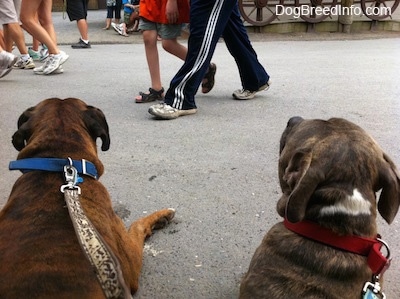 They never seem to be able to stay there for long, as someone is always coming over to pet them and they both eat it up. Both dogs just love people. Bruno's tongue always starts going in a submissive gesture. He is a big licker. Notice how poor Spencer the Pit Bull has some of Bruno's drool on his head. Ewwwww...one of the things you have to put up with when living with Bruno the Boxer! Silly Spencer decides to rollover belly up as we waited for some of the kids to return from a ride. He ended up getting a nice belly rub too! What a great day it was at the park! Rain or shine the dogs get to go for pack walks daily. This particular day it was pouring rain. At first Spencer didn't like the idea of getting wet, but mommy insisted. Good thing he had his rain coat on. ;-)

Spencer and the Cats

As usual we were getting ready to go out for a walk. We always go somewhere new and today we were heading to town. When we got there Spencer was acting funny. I had opened up the hatch as usual, and instead of coming over to get leashed up he just stood there looking really cautious. I looked around, what was wrong with him? There were cars going by, people walking up and down the streets, some guy working on the outside of a building. Nothing he has not seen before, yet something was bugging him. His eyes were a little wide and he was looking with caution. He never acts like that. I leashed him up as normal and we started out on our walk. About 20 minutes later there was a 5.9 earthquake. I swear he knew something was not right. I bet he felt some smaller tremors before it hit. Never underestimate your dog's senses. There have been so many times he alerts me of something in the distance just with his eyes. He'll pause and give it a hard look and I’ll know something is there. He's always right. Usually he's alert and perky about whatever it is; this time he was cautious, and with good reason. If he starts acting like that again I am going to take his warning seriously. 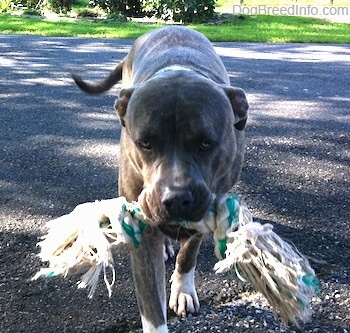 He is fine now, back to his usual self. He even brought me a toy. He loves bringing toys to people. What a good boy.

According to Spencer, we had some tiny aftershocks later the same evening. I didn't feel anything but I believe him. He jumped up from the driveway and looked around like there was something going on. He was not looking in one direction but all around him. Then he went to the door and wanted to go inside; very strange behavior for him. He never acted like that before today. I think he could feel or hear the ground doing something.