Raising a Puppy: Spencer the Blue-Nose Brindle Pit Bull. Learning to Heel on a Leash 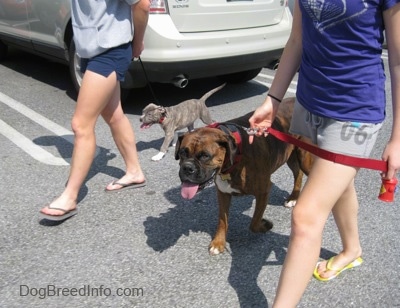 It seems that a dog heeling on a leash is one of those long forgotten commands. When I was a kid I remember the basic commands of a dog being, sit, stay, come and heel. Nowadays however, it seems to just be sit, stay and come. What most folks do not realize, however is heeling on a leash is one of the most important commands as it affects a dogs temperament. Dogs that learn to heel are more respectful and more likely to listen in other areas of their lives. They are calmer and more secure as they do not have to worry about leading the pack. They are also more trustworthy with children and other humans and dogs because their mind-frame is on following, rather than leading. Out of curiosity I once asked a pet store chain that offered puppy classes if they teach the dogs to heel on a leash. They stated that they did, but only in their advanced classes. Shame, shame. Heeling on a leash should be taught from day one so the dog does not even know what it is like to be a leader of their humans. It's not an advanced command; it's a way of life that goes along with no jumping on humans. It's a sign of respect that keeps the dog in a mind-frame that will keep them safe, other humans safe, and improve their overall temperament for the better. Dogs that are taught to follow are also more relaxed about everyday life and we humans know that being relaxed is a much better way to live. It is never too late to teach a dog good leash manners, however if you have a puppy it is much easier to start young and be consistent as puppies have a strong natural instinct to follow.

On the first day we bring Spence home we drive him to the pet store to pick up his puppy food. At first Spencer is not so sure about walking on a leash. I believe it was the first time he had worn a collar as well. We use Bruno to lure him to walk. Spencer seems to want to follow Bruno wherever he goes and the fact that Bruno is a pro leash-walker makes this whole process easier. If we did not have Bruno we would have used treats and toys to get him to follow. 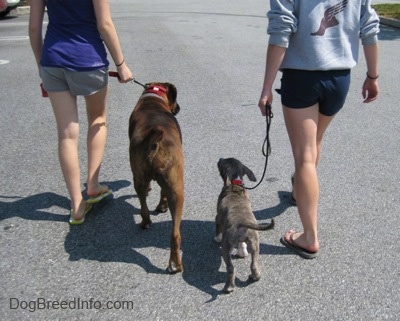 Every once in a while Spencer would stop walking, unsure of his surroundings. We knew if we wanted to raise a secure confident puppy we could not just pick him up, nor could we yank and pull him. Puppies need time to soak in their surroundings and mentally get over any obstacles they encounter along the way. We quickly realized that if we circled Bruno back behind Spencer he would suddenly forget about whatever it was that made him stop walking and he would start following again. Over and over Spencer would suddenly stop, unsure about things around him, and over and over Sara would swing Bruno back around and away we would go again. Sometimes if we just waited a few seconds he would get over it without Bruno's help as well. 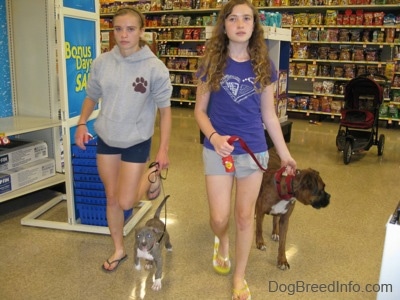 Spencer was getting the heeling on a leash idea very quickly as he watched his new big brother and mimicked him. 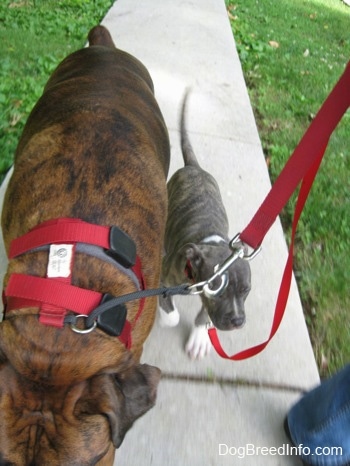 The next day I take Bruno and Spencer for a morning walk before the heat of the day hits. Spencer does very well! He now seems to understand what to do and is confident enough to keep walking. The only time he hesitated was when we had to go up or down a curb, which must look like huge obstacles to him. Bruno and I give him the extra time he needs and Spence does excellent! 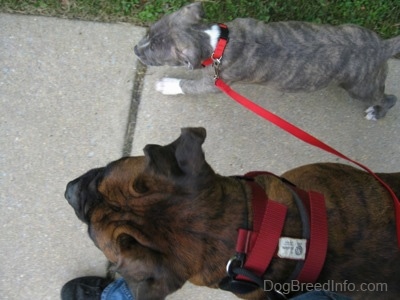 We will never give Spencer the opportunity to experience what it is like to lead humans. He is walking like a pro next to his big brother. We passed a lot of people out waiting for the school bus with their children, other dogs, cats, squirrels, cars driving by and the two of them ignored it all and kept walking. Bruno, what a great mentor you are for your little Pit brother. 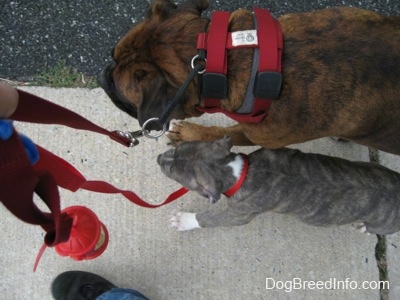 It is very relaxing and enjoyable to take dogs for a walk that stop when you stop, start walking when you start and do not even try and pull in their own direction. The dogs are happy, and I am happy.

Bruno the Boxer helps teach Spencer the 10-week-old Pit Bull puppy to heel on a leash. Notice how Bruno waits for Spencer when he slows down to step up the curb. I had not given Bruno a command to stop; I myself had stopped, so Bruno stopped too. When I started walking again, he started walking again. What a good boy, Bruno.

Spencer goes for his first real pack walk with a bunch of his new friends. Spence, maybe when you grow up you'll actually make it through the whole walk! :) 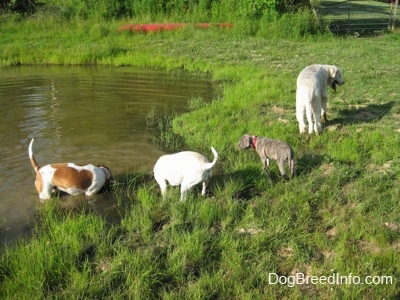 After the pack walk we allow the dogs to cool off in the pond. Pictured: Darley the Beagle mix, Maggie the Pit Bull mix, Spencer the Pit Bull puppy, and Tundra the Great Pyrenees. 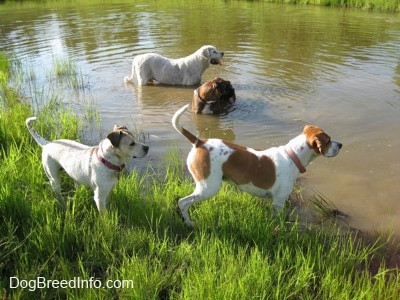 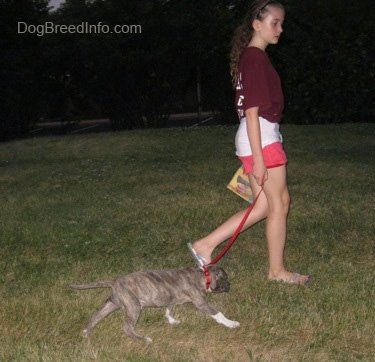 Spencer did very well on his first pack walk through town. He seemed to get a little over-excited when he walked next to one of the other dogs besides Bruno, licking at their mouths. He is especially attached to Maggie the Pit Bull mix. I didn't want to correct this too much on his first town walk because I was happy he was actually heeling while walking on the leash without being unsure of his surroundings. We will work on walking next to the other dogs without trying to lick them as he gets more comfortable with the whole leash idea. 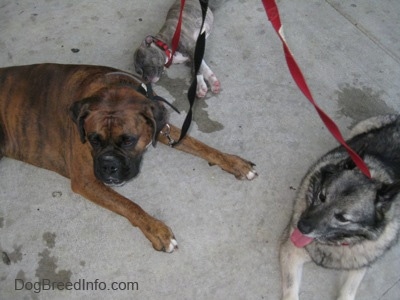 We stopped at a store and had a water break. Spencer had walked about half the walk and apparently that was all this little pup could handle for one night. 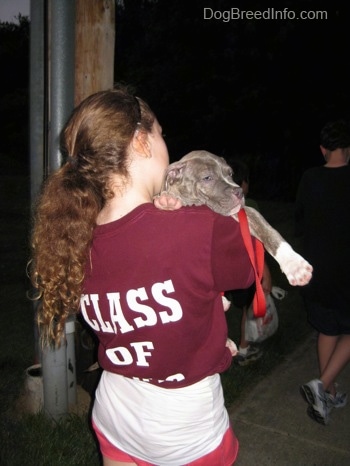 Sara and I took turns carrying him. Whenever someone picks Spencer up he goes completely limp. His entire body relaxes. He's like carrying a bag of jelly. 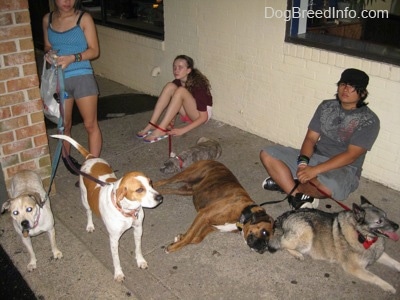 The pack is beat after their walk.