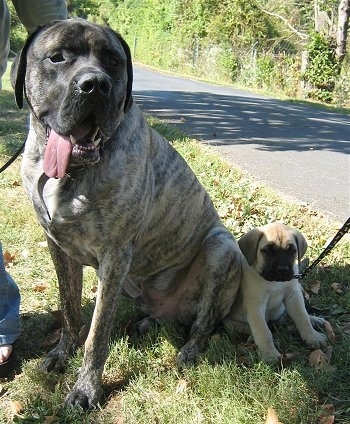 Thor the 160-pound American Mastiff at 3 years old with his new little brother Leo, an 8-week-old English Mastiff puppy weighing 14 pounds and growing. "It's only been 5 days and they are really starting to bond. I am SOO happy about it :) Last night Thor was lying on the kitchen floor all sprawled out. Leo comes running in and jumps on his head. He was chewing on Thor's ear and biting his head. Hah. It was cute. Thor let him do it for a while. When he got tired of it, he just stood up and Leo fell off :) I was watching some of my Tivo'ed CSI's last night and Leo started barking at Thor, then Thor started barking back. I was like ’Boys, boys! I can't hear’ hah. They didn't seem to care (go figure). Then they each took a bone off the floor and lay next to each other eating them :)" 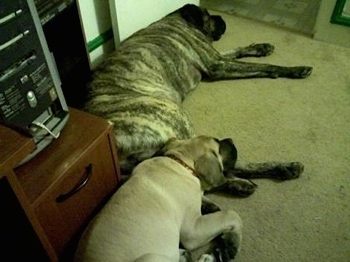 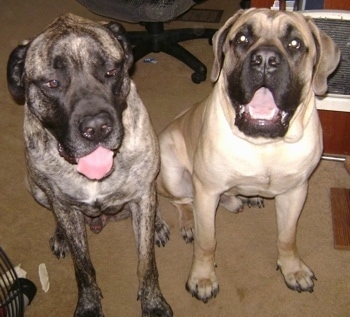 "I think it's finally happened. Leo is starting to get bigger than Thor. He is about 145 pounds in this picture. I was watching them sitting next to each other this morning and snapped a few pictures. Leo is a bit wider and his head is bigger, but at this point I think they are at the same height. But Leo is only 9 months (will be 10 months in a little over a week) so he has a lot more growing to do. At almost 4 years old, Thor the American Mastiff is down to 140 lbs. He is tall and lanky where Leo the English Mastiff is a little tank. Leo seems like a very solid dog." 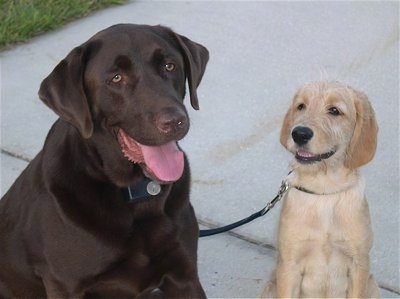 Kodi the 5 year old chocolate Lab and his new little Labradoodle brother Murphy at 12 weeks old—"Murphy is a F1 Labradoodle from Old McDoodle Farm. His mother is a yellowLab and his father is a cream Standard Poodle. Kodi was bred in Northern Illinois and is an amazing hunting dog. He especially loves to retrieve pheasants and quail. With Murphy's bloodlines we don't know if he will want to retrieve a duck or whip up a pâté with it!" 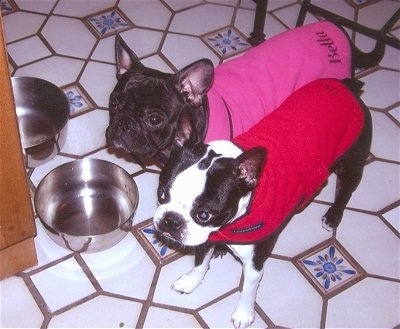 Bella the French Bulldog with Oscar the Boston Terrier 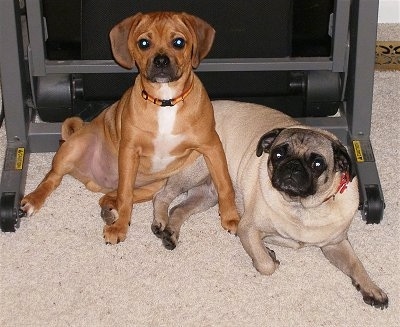 Miller the Puggle (left) and Brooklyn the Pug (right)—they are best friends and give each other the run of their lives every weekend when they are together! 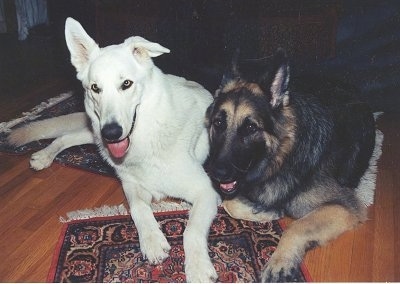 Rex, a White German Shepherd Dog and Sultan, a black/tan German Shepherd Dog—"Sultan (black and tan) passed away Jan 2006 and was a much loved family dog for many years. Rex is alive and well, and my loyal shadow. I have never loved a dog so much! These two German Shepherd breeds have abilities that surpass anything I’ve seen in humans. Both were rescues from the GS Rescue in Burbank, CA. I cannot imagine owning another breed of dog. This is the best!" 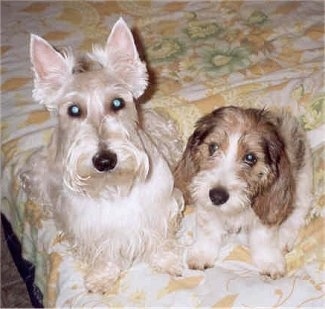 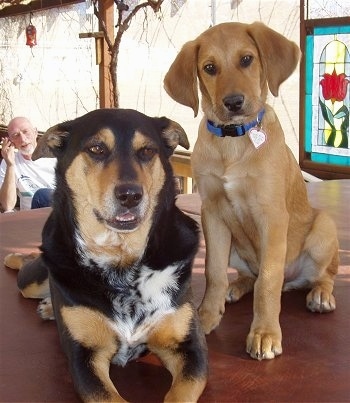 Tabor the Beago (Beagle / Golden Retriever cross) and Connie, an 8-year-old “Heinz 57” rescue dog. Her owner states, "She is a number of different breeds. I can't really tell what kind. If I were to guess I would say Australian Shepherd because of the freckles on her chest, German Shepherd and Doberman. She is a wonderful girl and has been a great playmate to Tabor as well as a mom."