"I have three dogs: 8-month-old Skooter, a sable half Pomeranian half Rat Terrier cross, his white, stub-tailed sister Kahlua, and a 5-year-old Chihuahua Rat terrier cross with one blue eye and one brown eye named Skyy (yes, there are two y's), who is deaf. They are very social and love to play with ANYTHING that will play back, even our kitties Kiki and Snickelfritz who act like they are dogs too."

"Before I ever knew about Cesar Millan's methods and ideals I was already a strong believer in the ’pack rules’ and apply these techniques to any canine I come in contact with, which is a lot because our pack also includes my parents’ full-blooded 5-year-old Collie Delilah, my older brother's 7-year-old Miniature Pinscher Junior, my nephew's 2-year-old Blue Heeler who we were given after she was removed from an abusive home where she was left tied up outside in a trailer park, and my little brother's 1-year old red  longhaired Miniature Dachshund Shirley Temple aka Shirley. I also run a pet-sitting and daycare facility from my home and even those dogs, such as Zen the Maltese or Shani the Basset Hound, are all happy, healthy and balanced, including our deaf half Chihuahua half Rat Terrier cross. Skyy was even attacked by a 60-pound dog (hence the large scar across her shoulders) and she still loves to play with other dogs and animals." 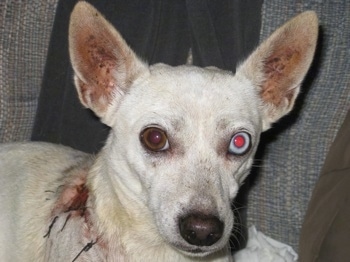 Skyy the deaf half Chihuahua half Rat Terrier cross—"Our days include balanced walks, playtime, relax time, and even mealtime is no small event. The first time they eat I feed them in separate bowls; the second time in the day that I feed them I will put all the food on the ground to encourage eating together with no food aggression and it stimulates their minds as they forage on the ground sniffing out the food. Anytime that I am feeding them I ask of my dogs to all be sitting and waiting patiently for me to give them their food." 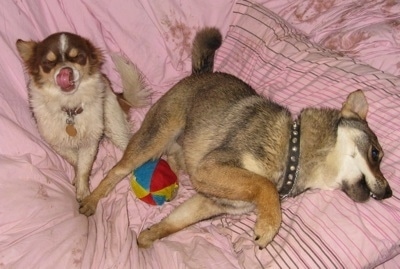 Shakespeare the Chihuahua with Skooter the Pom / Rat Terrier mix—"Skooter the half Pomeranian half Rat Terrier cross definitely inherited the Pomeranian genes as he LOVES to bark while playing and wrestling, just like his dad, a full-blooded Pomeranian (who belongs to one of our neighbors, as well as his mother, a Rat Terrier). He also learned to play fetch by watching Delilah. As soon as he sees that ball he starts jumping in the air excitedly then plops his rear on the ground with tail swinging in full speed while he waits for me to throw the ball. He always knows when it's bedtime, too. When it comes time to put all the dogs in their kennels at night he will already be fast asleep in his kennel that he shares with his sister Kahlua." 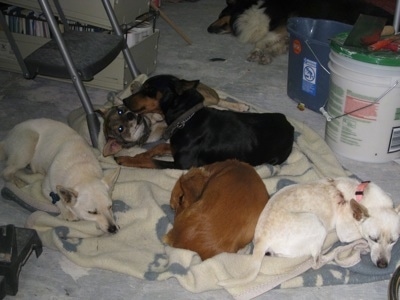 "Kahlua the Pomeranian / Rat Terrier cross inherited more of the terrier characteristics. She is the biggest cuddle bug of them all! As soon as she sees someone her stubby little tail wags at a million miles an hour, shaking her whole body as she sprints at full speed toward you just to have a scratch behind the ear, and once she's there she won't leave your side. Kahlua is an outstanding agility player as well. I don't compete with my dogs but I do teach all of them agility as a play tool and to give them a job to do. Kahlua was the first one to jump through a hoop on command without any help from a training leash. I think her little heart almost exploded when she saw how happy she made me. We always know when she was doing something she wasn't supposed to be doing as well, like going into an off-limits zone. She will come trotting back into the room and look at us with her tongue hanging out and ears pricked up and you can almost hear her saying ’What? I didn't do anything. I'm a good little girl!’" 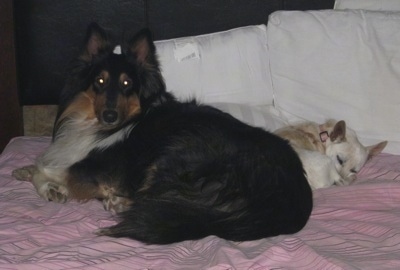 Delilah the Collie with Skyy Chihuahua Rat Terrier mix—"Rawhides are Skyy's favorite toy. Once she has one picked out she will run around the yard or house and just carry it with her everywhere she goes. You can even pick her up and she still holds onto it. Since Skyy is deaf she can't hear commands but she still knows how to come by me waving at her, sit by me pointing a finger at her, stay by me holding a flat hand like a stop sign, and walk on a leash properly. Skyy is the quietest and calmest of them all, preferring to sit in one spot and sleep while you stroke her, or finding any kennel that's open and sneaking inside for a quick nap. But don't let that fool you; she still loves to chase the other dogs around while they play." 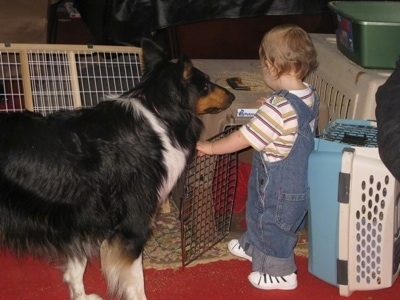 "Delilah the Collie is the most mysterious of all our dogs. She just showed up one night on the Fourth of July by pushing open the door and waltzing in and sat down right next to the couch like she knew that's right where she was supposed to be. She hasn't left since and she's quite the escape artist, easily jumping right over our fences. We finally got to the point where we had to run an electric wire along the top to keep her safely contained. She LOVES car rides and will stick her head out the window or ride in the back of the truck quite contentedly with ears back, tongue out and tail wagging. I think that would be Delilah's doggy heaven just to be riding in the back of a truck. She also likes to sneak out to the pond, spending the afternoon swimming and sniffing out pond critters, but she always comes right back, tail wagging, coat dripping wet and waiting expectantly to be let inside." 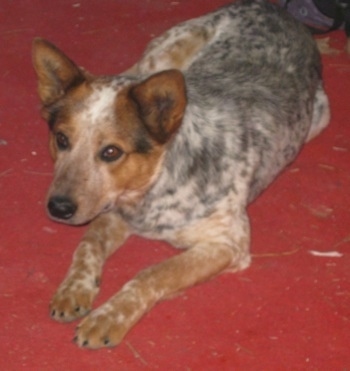 ""No Name" the Blue Heeler is still a little shy after her abusive past but after having her only a week or so she is already happily joining us on pack walks and dives in with the rest of them at mealtime when before, after first getting her she would run away and hide if one of the cats landed on the ground next to her. So far she has proved to be quite the quick learner. She knows which car is mine and will wait at the end of the driveway for me to come home and as soon as she sees me she stands up and runs to greet me."

"Shirley the Miniature Dachshund is a silly, sappy ragdoll. The only thing in life she cares about is whether or not she is rolled over on her back with your hand rubbing her belly. If you call her to you she will gallop up to you and immediately roll over with her tail still wagging and her eyes closed so you can start rubbing, and as soon as you pick her up her body goes limp, just like a ragdoll. It's really comical, though when she gets into tug-of war-battles with Delilah. (She never wins but just keeps trying!)" 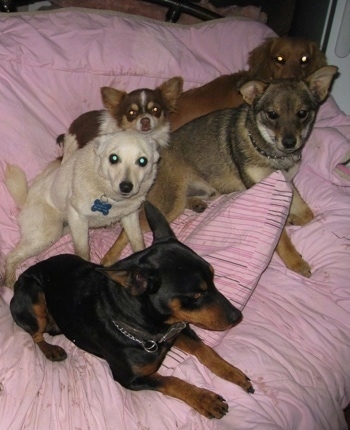 "Junior is one of the most muscled  Min Pins I have ever seen and he has a personality to match. Without Junior's daily exercise he would be quite the terror as he is VERY possessive, though with proper exercise Junior is one of the smartest dogs I know. As soon as he sees the leash he proceeds to jump up and down, jumping as high as 3 feet into the air, but as soon as I tell him to sit, in the blink of an eye he will be quietly sitting with one front paw daintily lifted in the air. He also joins us in pack walks but it takes a mentally strong person to walk him as he is constantly testing you to see if you really are a pack leader. Raising Junior has been one of the most frustrating and rewarding relationships I have ever had the pleasure to be a part of, and he has made Miniature Pinschers one of my favorite breeds. Junior is also quite skilled at agility and learns very quickly; usually I will only have to show him something once and he will have already learned it." 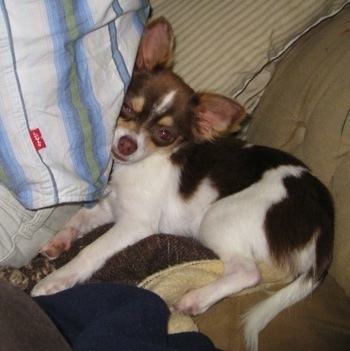 "The one I have saved for last is Shakespeare, my recently passed away longhair Chihuahua. Shakespeare was always surprising people with his upbeat friendly non-steroidal Chihuahua personality. He was always making me smile with his curious antics, one of which being his ’good-boy dance.’ Every time I told him he was a good boy he would jump and twist around with his tail wagging and tongue lolling out. He was always curious and was even friendly to small children who would excitedly run up to him and get in his face to pet and hold him. He had the widest range of facial expressions than any other dog. We could have full ’conversations with each other just by his face alone. He was always right in tune with how I was feeling, or what I was thinking. He had a favorite hiding spot, too, where he would go anytime he had a special treat or if he wanted to hide, which he did when he knew I was about to make him do something like take a bath, which he found awful and would stand there with a very un-amused look on his face for the duration of the bath. He never hesitated to actually get dirty, though. He was always the first one in the mud or lake." 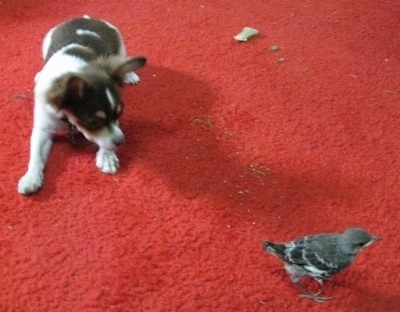 "He played with every animal that came through my home, including a baby bird we raised. The first time he met the bird he was very gentle with it and soon had the bird playing back by hopping back and forth toward him. He also thought it was pretty funny to run at a flock of birds and when they flew away he would look at me and I could swear he was laughing, even though he never once attempted to actually hurt another animal or human. One of his favorite things to do was to go on a bike ride, which he liked even more than the pack walks. I was a little apprehensive the first time I took him bike riding, thinking that because of his size the bike right next to him might be scary, but as soon as I started pedaling he started grinning and his tail popped up into the air and he was always wanting to go faster. I think he enjoyed the bike rides even more than athletic Junior, who I have to take on bike rides just to tire out. The walk alone isn't always enough for Junior. Shakespeare's best friends were always our cats. The cats would flop out on the floor while Shakespeare would run circles around them and wrestle with them, and yes, the cats would wrestle back. He was always right in my lap, especially in the car. He loved to fall asleep with his head resting on my right arm while riding with me in the car and even when I tried to stand up he would cling to me like Velcro. I will miss him dearly and I will always see him smiling in my memories."