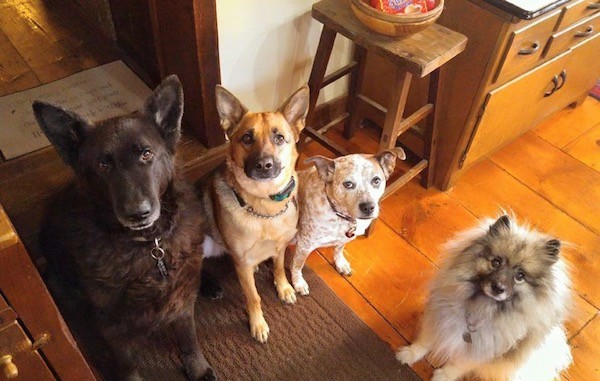 King the black Shepherd, Mabry the German Shepherd, Layla the Red Heeler and Bullet the Keeshond 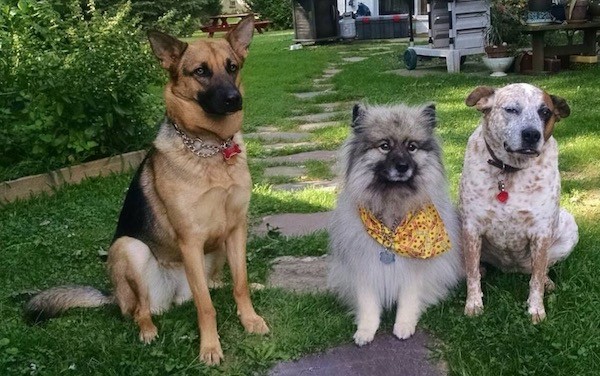 Mabry the German Shepherd, Bullet the Keeshond and Layla the Red Heeler 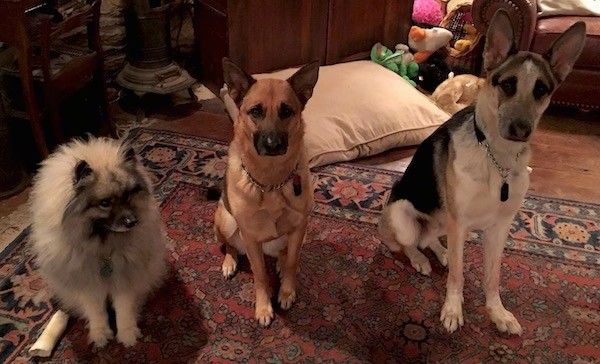 Bullet the Keeshond, Mabry the German Shepherd and Benny the Panda Shepherd 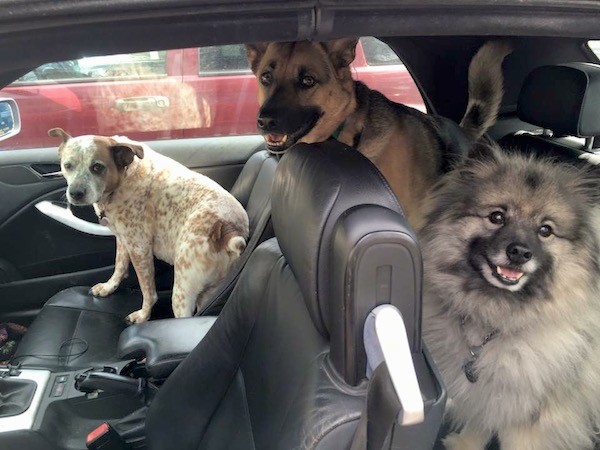 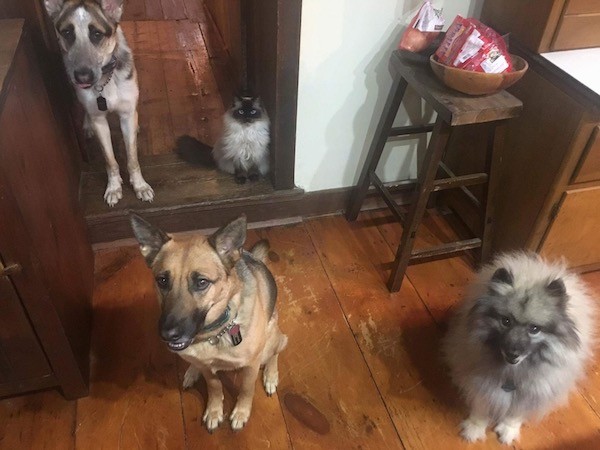 Benny the Panda Shepherd, Henry the Ragdoll cat, Mabry the German Shepherd and Bullet the Keeshond 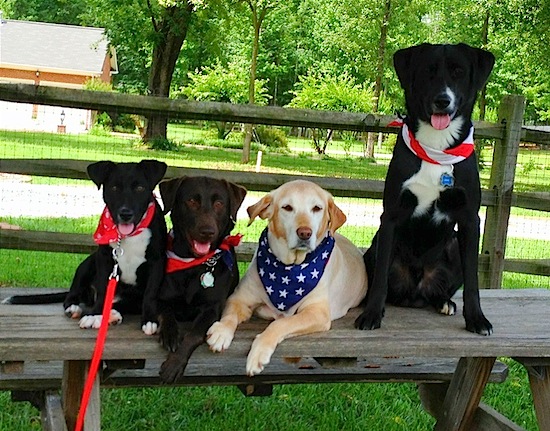 "Tippy the Corgi Pit as a puppy at 12 weeks old with her siblings, Maggie the chocolate Lab, Sugar the yellow Lab mix and Angus the black Lab/Dachshund/Northern sled dog type breed." 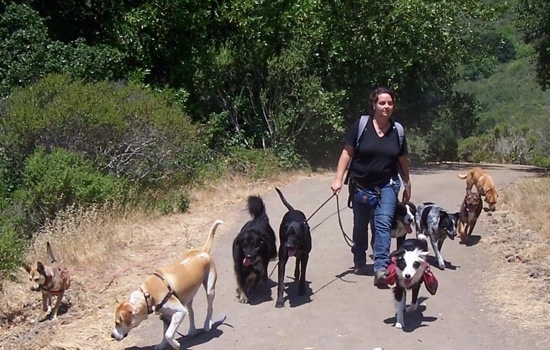 Odin the German Shorthaired Lab (on leash) out on a pack walk. Odin works alongside his owners in rehabilitating rescue dogs. "We watch Cesar religiously. We are pack leaders who fully understand the importance of exercise, discipline and affection. Included in my attachments are some dog-walking pics of my fiancé and me. When walking a pack as large as we walk, we know that we must be the ones in control otherwise it could be a dangerous situation." 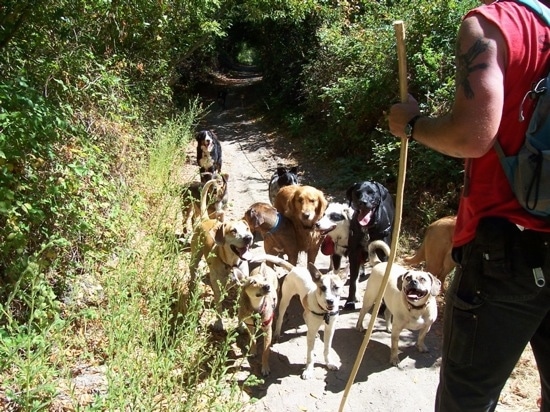 "We have been very successful in rehabilitating both foster/rescued dogs as well as helping dog owners learn how to work with their dominating dogs." 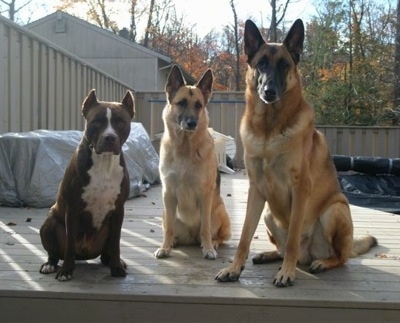 "This is my pack. Chopper, American Pit Bull Terrier, Kaiya, German Shepherd Dog, and Diesel, Belgian Malinois / German Shepherd. They are the best of friends and like to go everywhere together, and always play and sleep together. Trained Cesar's way—they know who the boss is in the family...ME!!!" 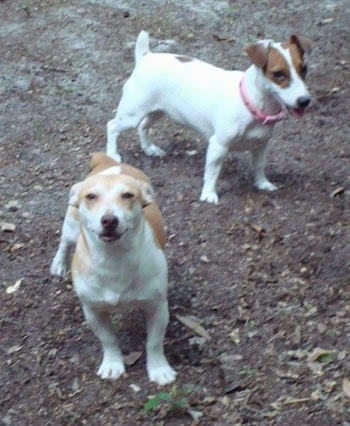 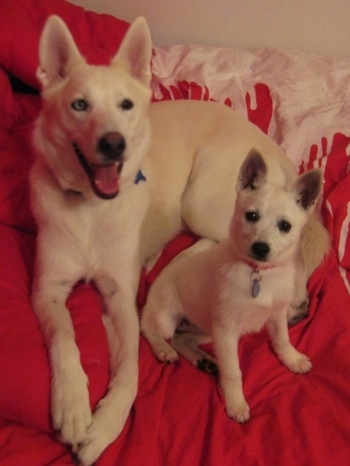 "The Alaskan Klee Kai (right) is 8 months in this picture and the Siberian Husky (left) is shown here at 1 year old. Before I got a Klee Kai, I always wondered how small they really were. Both have unlimited amounts of energy; they can play all day. Sometimes my Siberian Husky gets a 6-plus-miles walk/jog comes home and still plays." 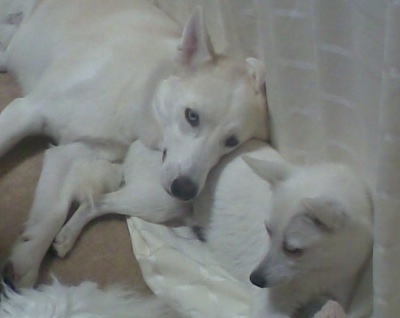 The Alaskan Klee Kai (right) is 8 months in this picture and the Siberian Husky (left) is shown here at 1 year old. 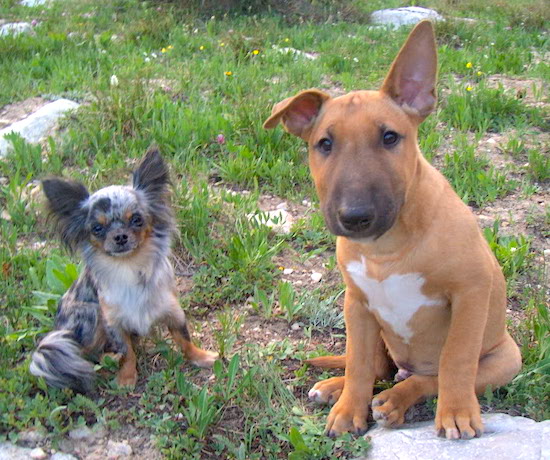 "Roxi, a long haired blue merle Chihuahua at 3 years old with Spuds, an English Bull Terrier shown here as a puppy at about 10 weeks old—Spuds’s coloring is called solid red smut which is not seen very often." 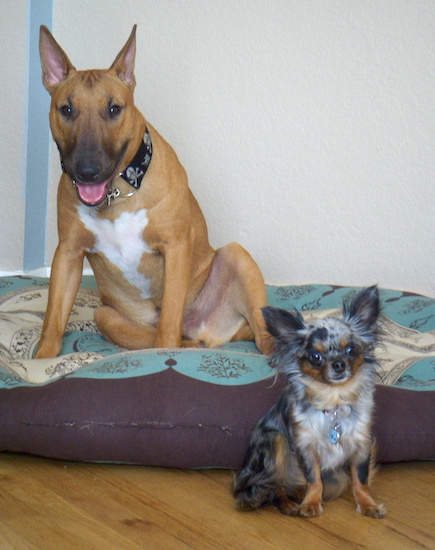 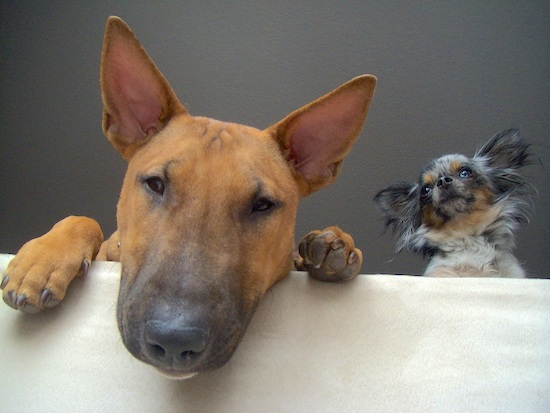 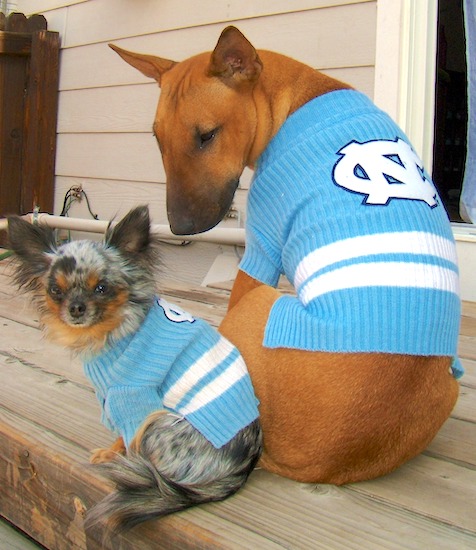 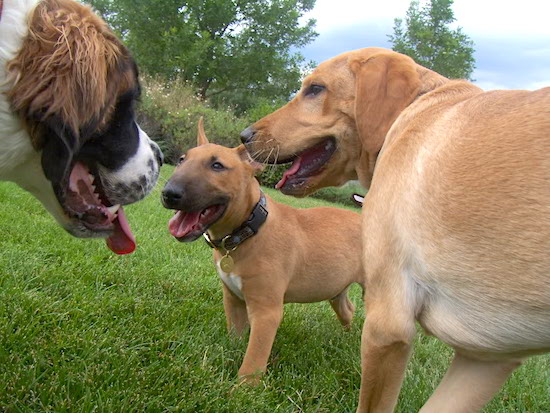 Spuds the English Bull Terrier puppy at about 10 weeks (middle) playing with Chuck the Labrador (right) and Maya the Saint Bernard (left). This is the age when we started Spuds’s doggy meet-ups to socialize him with all kinds of dogs. 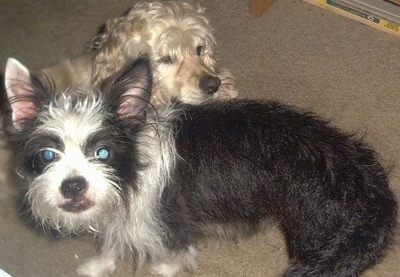 "Here are my sweet little dog friends, Dabbles and Buttercup. Dabbles, whose full name is Dabble Doodle Doo, is a Boston Terrier mix. She is 3. Her daddy was a full-blooded Boston named Doodle and her mom was a mixed-up black-and-white wiry-haired dog named Abby, hence the name Dabbles. As you can see, she has the pattern of a Boston and what I like to call a case of "Kramer Hair." I can't imagine that there is another dog anywhere that looks like her. She's feisty and full of fun. She behaves like a Boston. Buttercup is our Buff Cocker. She is 5. She lost an eye when she was a puppy. We still think she's beautiful. She's soft and loves to snuggle. I think our dogs are well balanced and happy. They know, just like the rest of the family, who's the boss: Mama. We love to watch Ceaser Milan. He's amazing. We used to have a problem with the dogs being aggressive toward visitors. We applied his technique of no eye contact or attention and it worked wonders. It was like magic. We also believe in exercise. Walk, walk and walk some more. It's never too much!" 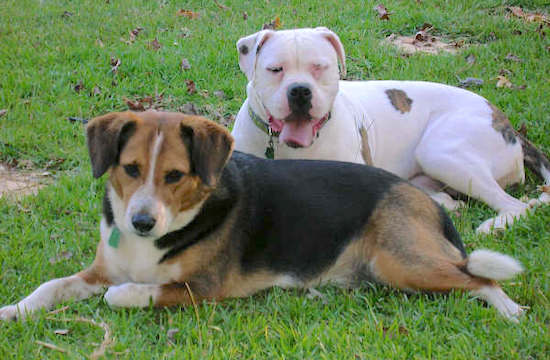 "This is my American Bulldog Carson and her best friend Lucy, who is half Beagle / half Border Collie. Carson comes from the bloodline of Chance from the movie Homeward Bound (they have the same father). We had Lucy for about 2 years and decided she needed a friend to play with. My husband and I were on our honeymoon back in 2005 and someone had an American Bulldog. We knew we loved this breed immediately. Carson was born in September of 2006 and we welcomed her in our home in November of that year. At first Lucy didn't want anything to do with her. But that quickly changed. They are best friends, sisters. They are inseparable. They have been the best part of our family (together) for over 2 years now. But we are now expecting our first child and can't wait for them to be a part of our son's life. My husband has watched the Dog Whisperer, gaining a lot of tips on how to get Carson to "calm" down. She loves people and thinks that everyone must love her. After using some of the techniques on the show, she has really changed into a calmer dog. I love both of my dogs like my kids. This is a really good breed." 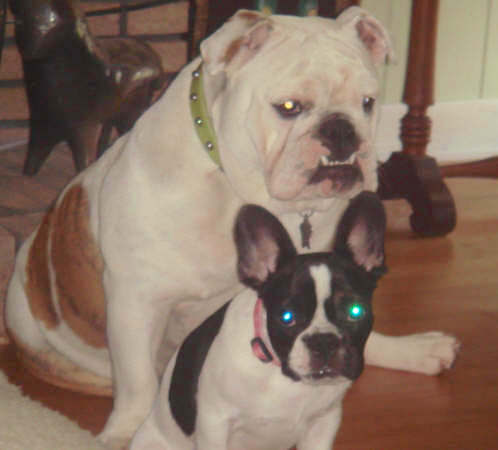 Halo the English Bulldog  at 1 year old with her buddy Glory the French Bulldog puppy at 14 weeks. "I agree with and follow Cesar's philosophies. I believe that they are better dogs because of it."