A day in the life with Spencer the American Pit Bull Terrier. 5 years old, 79 pounds, 22 1/2 inches from the ground to the highest point of the shoulders (the withers). 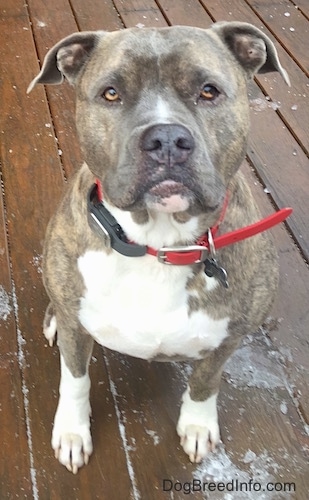 5 years old—Spencer shown here wearing his GPS tracking collar, purchased after his night on the town with his kid sister Mia the American Bully. 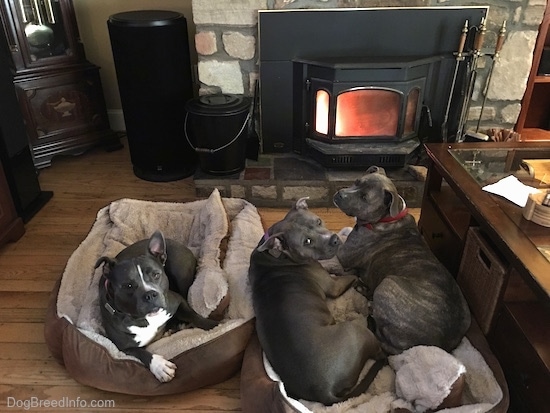 I was at my computer and Spencer walked over and poked me with his nose. I said "What? What do you want?" And he walked over to the cold fireplace, stared at it and looked back at me and Stephen. "I said, you want a fire?" And his tail wagged faster and he perked up and looked back at the fireplace. Stephen started a fire and he lay down. The other dogs joined him.— Pictured Left to right, Mia the American Bully, Leia the Pit Bull and Spencer.

About 10 minutes prior to him asking for the fireplace to be lit, Sara said that Spencer walked into the kitchen and poked her and then looked at his water bowl. The water was not clean enough for him to drink. He's very picky. Sara changed it and he drank. He will smell his water bowl and then look up at you like, “You seriously expect me to drink that?”. He will look at you, lay his head on you and if that does not get your attention he will poke you. Stare at the water back and forth back and fourth from the bowl to you, calmly, gently with his soft eyes and slow wag of his tail... until you change it. Dogs can smell water and Spencer feels that already-been-drooled-in water is not worhty of drinking.

If I wait too long between putting the dog beds in the washing machine, Spencer will remind me by telling me he wants his bed cleaned. I have to cover it with a clean towel before he will lay down. He pokes me and wags his tail and looks at his bed until I figure out what he wants. 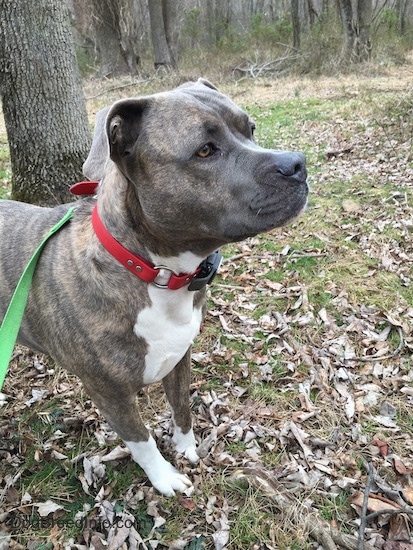 When Spencer was a puppy Sara taught him to poke something with his nose for a treat. He was only given the treat if he was calm and polite about it, taking the treat gently from her hands. Now, when he wants something he uses that as his way to tell you if you are not paying attention. First he will lay his head on your lap, if that does not work you get the nose poke. Not only is Spencer brilliant, he's very particular and fussy. An anal retentive Pit Bull! Who would have guessed! In the order of the pack, he may be the back of the line type, but he seems to be the smartest out of them all.

Smarter Than the Other Dogs 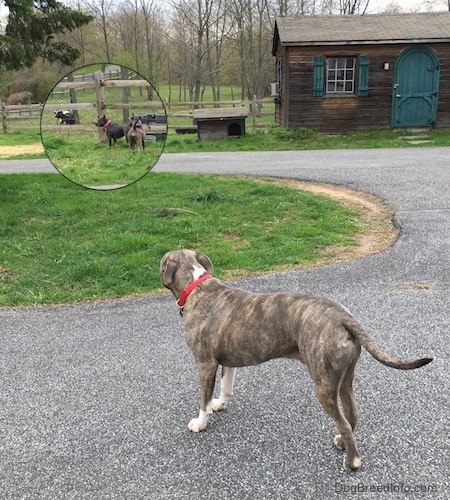 I walked out of the barn and Mia the American Bully started barking like there was something in the goat field that didn't belong there. She took off running with her hair up, barking and growling as she ran. Leia, Amie's Pit Bull, followed behind her, her hair and tail went up, too, both dogs in guard dog mode. But I knew there was nothing out there. Mia just does not see that well and she was most likely barking at the upside down water tub, or the herd of goats laying down, who, to her blurry vision, did not look like goats from a distance. How did I know this? Because Spencer just stood there looking at the other dogs as they took off. I said out loud "Yeah, Spencer, they are nuts" and he turned towards me, wagged his tail and looked back at them. As Mia approached the goat fence she realized whatever it was she had seen was not a threat and she stopped barking, Leial following in her paw steps. All while Spencer calmly watched them not bothering to waste any energy on their faulty judgment. 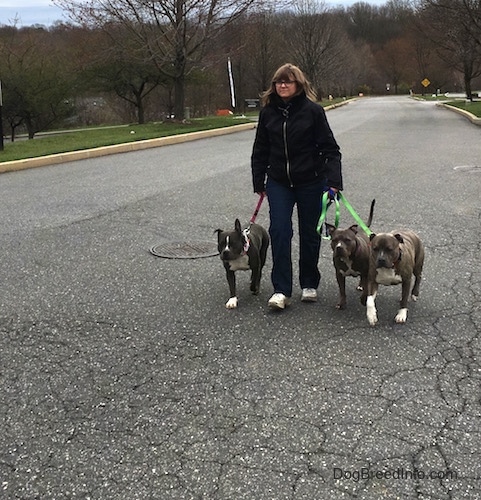 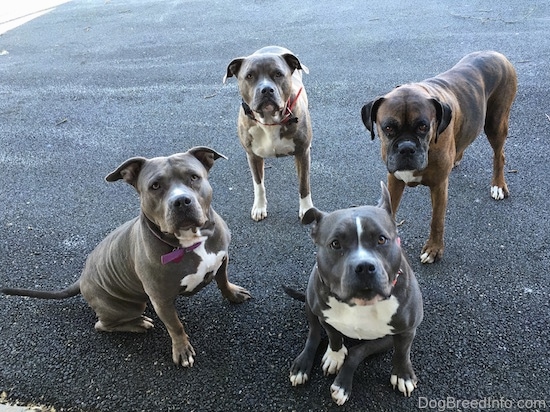 Sadly, Bruno the Boxer passed away not long after this picture was taken from very aggressive cancer. Even before Bruno stopped eating and before he started showing other signs of being ill I had a feeling something was not right by the way the pack had changed. The other dogs had stopped hanging around with him, Mia clinging to Spencer instead of Bruno. I started noticing the other dogs challenging him. There was tention among the pack. The dogs knew before the humans. R.I.P. Bruno