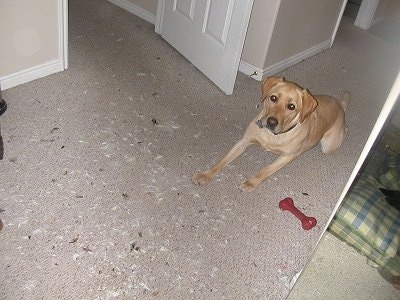 Caught in the act—a 2-year-old Yellow Lab and a 4 ½-year-old Chocolate Lab having a pillow fight—"I had a funny experience this morning that you with kids and dogs (and those that would like either) will truly appreciate. Sady, my 2-year-old Yellow Lab has a fascination with those round neck pillows. She has destroyed three of them. It doesn't matter what they are made of and she only does it to the neck pillows, not any other pillows." 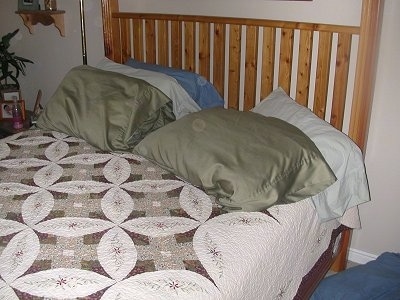 "I just bought both my husband and I new neck pillows last week. When I get up and make my bed I bury them under everything so that she won't be tempted to get them. They are under the blankets, my bedspread and three more pillows each." 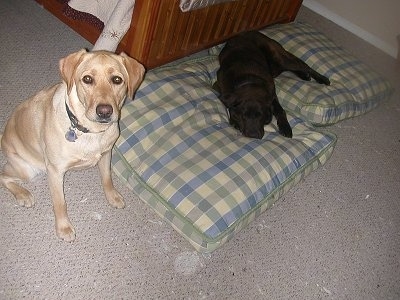 "Lately when we get done walking, she and Bear like to play and roughhouse for about an hour. No big deal except when I get into the shower or bath, I don't want them destroying anything. I'm also a little nervous that while Bear has that energy he will jump the fence and go wandering. So when I start to get ready I just shut them in the bedroom with me so I know where they are." 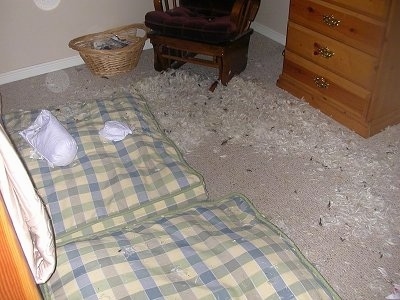 "Well this morning I thought the play time was over. I decided to have a bath. I put a big blanket on top of my bed, because I don't want the dogs on my bedspread. So there was an extra layer even over the little pillows. Next thing I know they are playing again. Then I realize I can hear ripping. I called them in to me to see what they had. In come two chickens. They were both covered in feathers. I got out of the bath only to step into a room with what seemed like millions of feathers everywhere. I got dressed and got the camera and took pictures for you all to see. It is hard to tell how many feathers there really are because the carpet is light-colored but there were a lot. It took two grocery sacks to pick up most of them and filled a vacuum bag. When I get to the store I need to buy more vacuum bags." 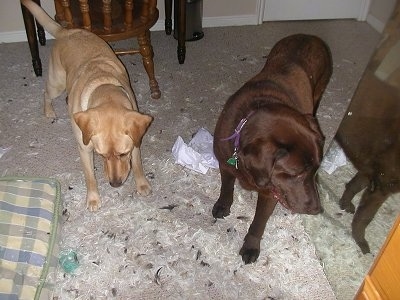 "They had carefully gotten under all the pillows and covers and gotten the little pillow. They knew right where to look. I also took the big blanket off and took a picture so you could see how carefully they got it. They both knew they were in big trouble. Bear immediately lay down and became a very good puppy but Sady only stayed repentant until I started cleaning up feathers. Then she was having a ball catching flying feathers again. It was like when I blow bubbles at her. I guess I knew that having dogs would be about like raising kids again. It reminded me of the time my boys had a beanbag fight—I was cleaning up Styrofoam balls for months. They cling to everything." 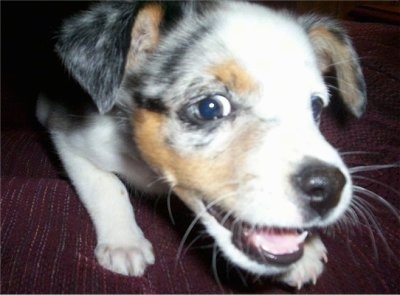 "This is Tassle. He is a Texas Heeler that LOVES shoes. In these pictures he is 7 weeks old. He is a crazy little thing. He has pretty partial blue eyes and long legs. He is wild. He doesn't like loud noises or pianos. He is a great little puppy." 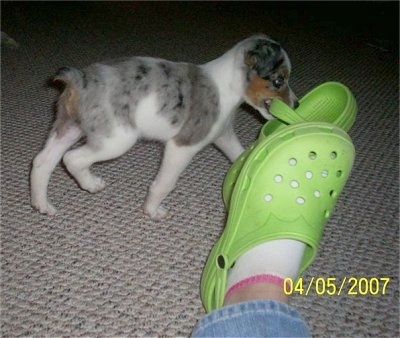 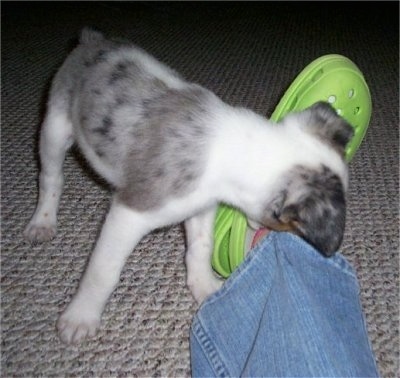 Ouch! That's my foot! And shoes are NOT toys! 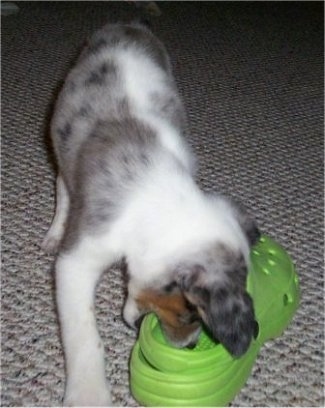 Tassle, shoes are NOT toys! 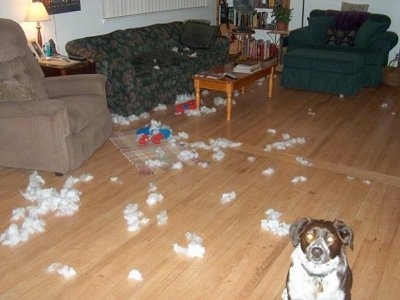 "Daisy is a Pointer / Border Collie mix. She decided it was time to have it out with her big Spiderman stuffed toy. Guess who won?!" 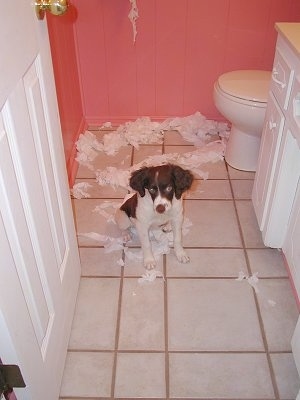 "Samantha, 2-month-old Brittany Spaniel puppy, caught in the act in the bathroom with a roll of toilet paper." 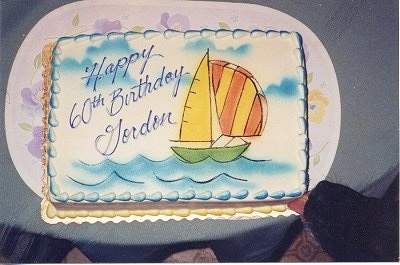 "I was standing on a chair, taking a picture of my birthday cake. When done, I observed Annie, our Black Lab mix licking the frosting from the lower right hand corner."