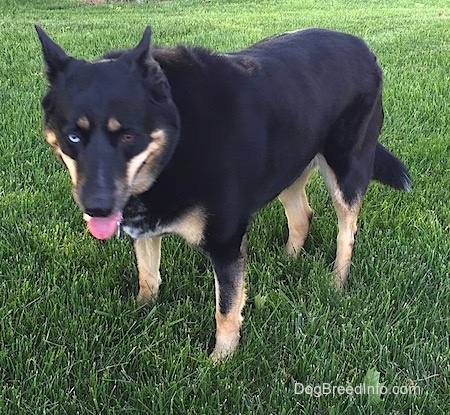 Pepper is a rescue dog. He is believed to be a Shepherd / Husky mix based on the shape of his body, his coat coloring, his one blue eye along with this demeanor and personality. His owners say he may have something else mixed in as well, but I would not be surprised if he was solely a German Shepherd mixed with a Siberian Husky. 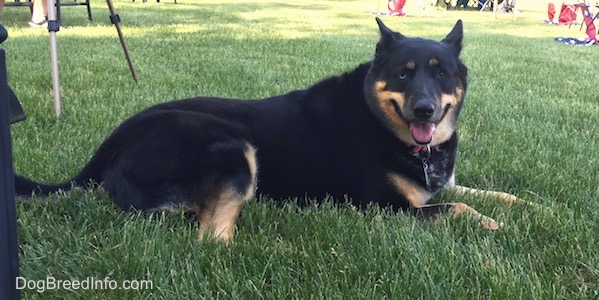 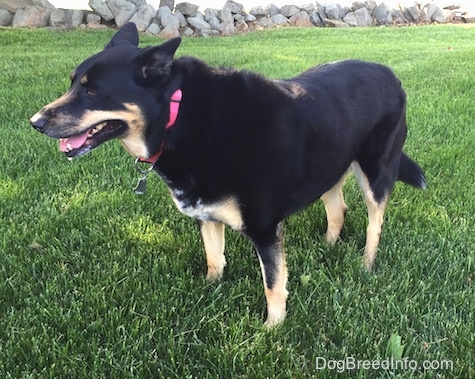 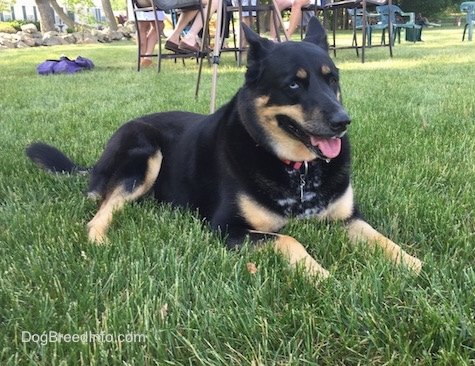 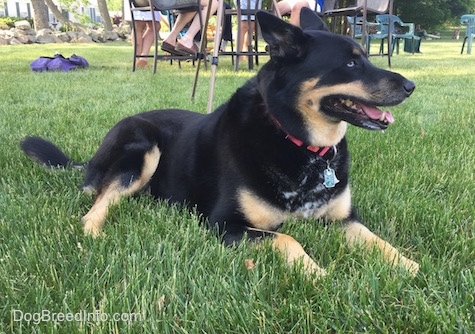 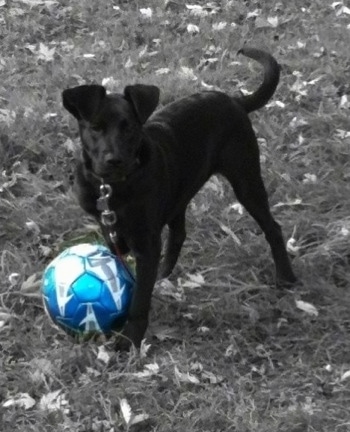 Chloe the Lab mix (father’s breed unknown) at 15 months—Chloe looks like she may have Patterdale Terrier in her, but that is only a guess.

"I am currently 22 years old and have been living on my own for 4 years. My boyfriend and I have been renting a nice little farmhouse with plenty of land and property, so we decided that we could use a companion to love, play with, and welcome into our new home. Since I have always had rescue dogs, I was quite aware of the work that has to go into fixing possible bad habits. Upon arriving at the shelter, I knew I wanted a younger dog with high energy, who likes other dogs, and a breed that would fit into our lifestyle."

"Chloe was 3 months old when I adopted her. She was born in the kennel after her mother’s owners had abandoned the mom after she had gotten pregnant. Chloe was adopted as soon as she was available. Yet, her first owner neglected her and Chloe's first couple of months all she knew was a cage and beatings."

"I adopted Chloe knowing full well the possibilities of many issues that she could have developed very early on."

"Bad habits she learned early on: She wasn't housebroken, leash broken, had massive anxiety problems, and loved to jump on people to get to their faces to plant a butt-load of kisses. All of this we discovered in a couple of hours after bringing her home. Later, we discovered she loved water but was too scared of it to swim. She just liked to jump and splash."

"Housebreaking was the easiest to fix. We just let her out after meals, before we left, when we came home, and made sure she was outside every couple of hours. Even though we were letting her out on our schedule, we made her sit by the door for a few seconds then open the door so she could learn "outside." It didn't take her long realize sitting by the door meant we would let her out to go pee. After the first week she was completely housebroken, letting us know when she had to go out."

"We have worked through all of her bad habits, except for the jumping. We had to research and try several techniques to try to teach her jumping is not acceptable behavior. The technique we found to work best is to step forward, saying no and then making her sit. It is still a struggle we are dealing with, but we have seen slow improvement. She does not jump on my boyfriend or me usually, and if it does happen it doesn't take much to correct it."

"The problem we have had to work on the most is her jumping on new people coming into the house and getting them to do the techniques. Chloe will start to listen and sit. Then you can just see her little mind wheeling with excitement; she starts trying to stand, wagging her tail the excitement builds and builds, then she leaps! It has taken a lot of effort, but she is showing fantastic improvement since we have been purposely having lots of people over to help her get used to not jumping on guests. We have applied the technique we use, but try to teach our friends. If they are not doing it properly, my boyfriend or I will step to the side of the newcomer and apply the technique until they get it. We know you can't let her jump at all, or she will start thinking it's OK."

"I have watched a lot of ’Dog Whisperer.’ I found it very educational and have tried several techniques myself, especially with leash training and putting the dog to work. She still occasionally will pull, but once I pick up the pace her mind just focuses on walking." 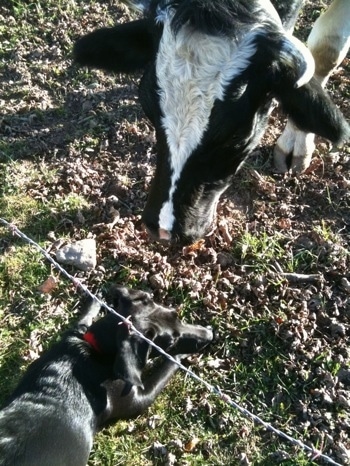 Chloe the Lab mix (father’s breed unknown) at 15 months, checking out the cow

Exercise:
"Chloe is a very high, high energy dog—constantly goes, goes, goes!! She sleeps soundly through the night, but during the day she likes activities. She gets lots of exercise, some days more than others. On minimum she will get a brisk walk, fetch, and a game of soccer. Usually she will get a mile walk to a creek that is down the road from our house. Then we will play fetch for about an hour before walking back (she loves the water!!). After, she usually just chews on her bone for a while then we will play soccer, go to the lake so she can swim, or go for a ride to my mom’s to play with her 2-year-old rescue Pitbull mix. Since she is always going, even in her own down time she needs something to do. So we have learned to have plenty of  bones lying around the house. Yet, since she goes through rawhides in a matter of hours, we invested in several indestructible chew flavored bones that were recommended to us by a trainer."

"Overall, she is a well-adjusted puppy that loves being loved and having fun. My mom, grandma, and now I only rescue dogs, but they take A LOT of work. Normal puppies take a lot of work, but if you don't mind a little challenge rescuing is always the way to go. My advice to anyone who is thinking about rescuing is to ask a lot of questions before and after you adopt. I have found that a lot of people are willing to help you adjust your rescue. Chloe and I have been through a lot of struggles and battles to get her where she is today. I would be lying if I said it was easy, but it was definitely worth it. Not only is she a healthier dog, but I am so proud of both of us for overcoming so many obstacles and challenges. I also find much pride in knowing she got a second chance, and I have worked with her every step of the way to where we are now. I honestly believe there is a stronger bond because of it." 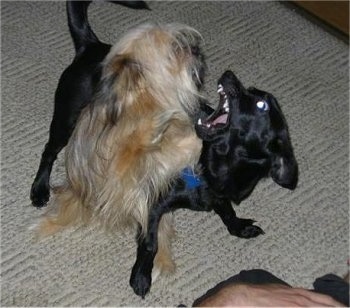 "Reggie (black snarling dog) the Patterdale Terrier mix playing with his friend. Reggie is very active and loving. He loves to play with the neighbors and their children. After he plays all day he loves to lie on my wife and me. In fact, he has to be on you all the time. One interesting thing about him that is slightly funny: he does not like being bothered while trying to rest or sleep. You cannot move or touch him while he's sleeping. He growls and snaps sometimes. I've tried to correct this, but it happens every time." (Top Dog) 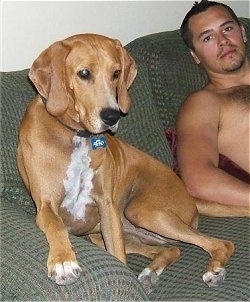 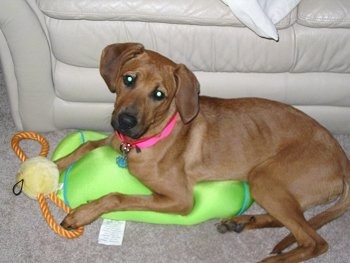 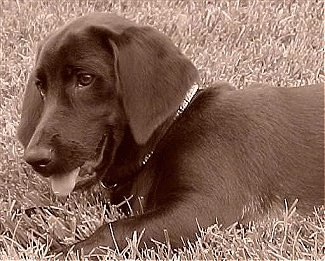 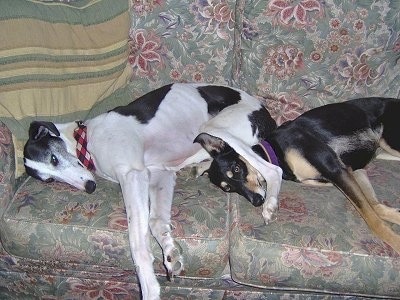 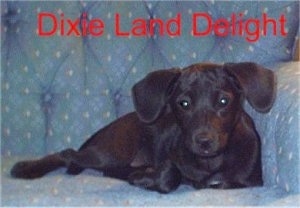