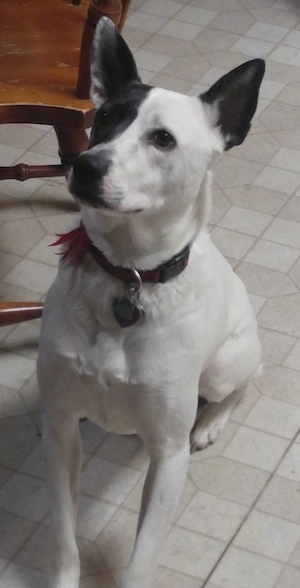 Dottie the DNA tested American Staffordshire Terrier, Shetland Sheepdog, Siberian Husky, Rottweiler, Boxer mix at 1 1/2 years old—"We rescued Dottie from a foster home not too far from where we live. We chose her because she is extraordinarily good with little kids and my wife and I have four children two of whom are quite young. She's a very sweet dog and though playful at times, is very calm indoors. The rescue organization we adopted her from listed her as an Australian Shepherd mix while the vet they took her to thought she was a Lab mix, but my wife and I didn't see any of those breeds in her. We thought she might have Border Collie or Whippet or Australian Cattle Dog (heeler) or Kelpie in her. A friend of my wife's suggested she was part Siberian Husky and my dad, who is a vet, thought she might have Bull Terrrier in her. We were curious so we had her DNA tested by Mars Wisdom Panel. As it turns out, they could detect 75% of her ancestry and she was an Amstaff, Siberian Husky, Sheltie, Boxer, Rotweiller mix with a high likelihood of German Shepherd, ACD/heeler, and Whippet making up a chunk of the "unknowable" 25% of her DNA. At first the Rotweiller part seemed odd but when you consider she's only 1/8 Rottie, it's easy to see how that could be overshadowed by the rest of her DNA. At 41 pounds, she's bigger than Shelties and Whippets, smaller than Boxers, Rotties, and GSDs, and just right for a female Heeler, Amstaff, or Siberian Husky." 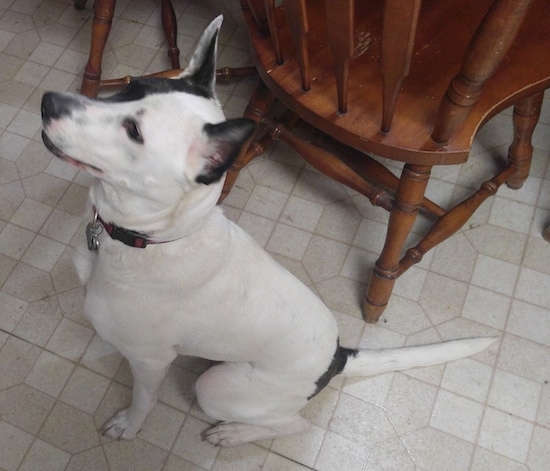 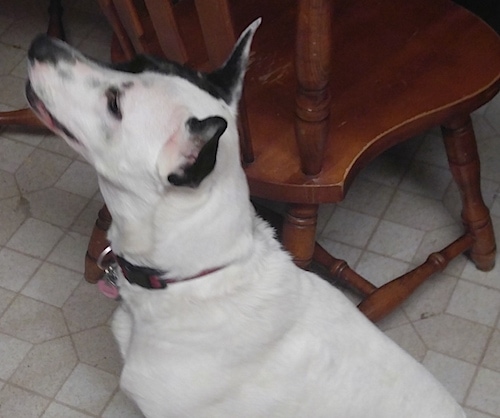 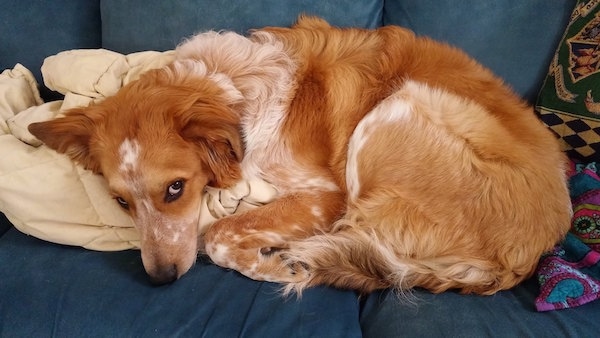 Zev (meaning wolf) at 18 months old resting on the sofa—"Zev is a rescue. His mother is a Lab and Border Collie mix. I have no idea what is father is, but it must be big like a Great Pyrenees! I rescued him from Wright-way rescue. He was one of 8 puppies of all colors. He is very smart and quite active. He loves to kiss people on their faces." 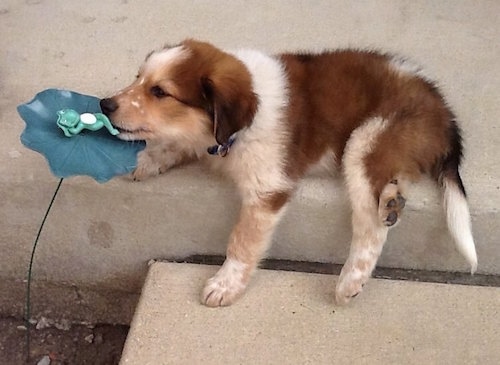 Zev (meaning wolf) the Lab / Border Collie and something else mix as a puppy chewing a plastic frog laying on a lily pad floater. 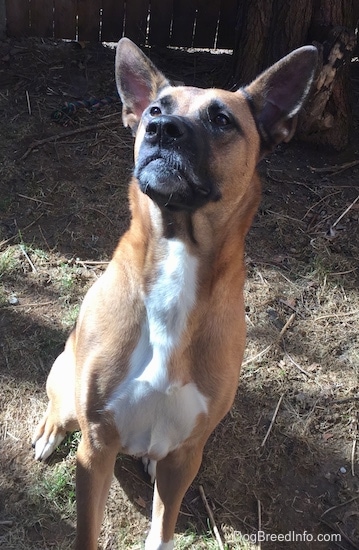 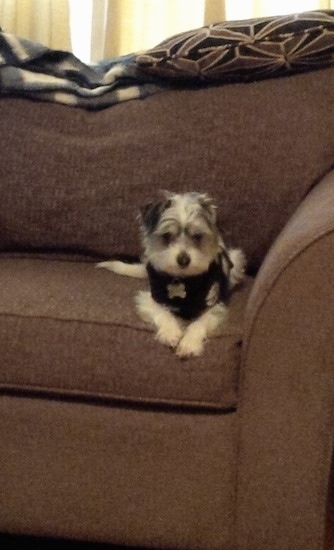 Moe the Jackapoo / Bichon mix at 6 years old—"Moe still acts like a puppy even though he is 6 years old. He loves squeeky toys that he can get in his mouth and he loves tennis balls. His mother was Jack Russell and his father was Bichon / Poodle. He is very smart and was really easy to kennel train. He is very protective of his people also." 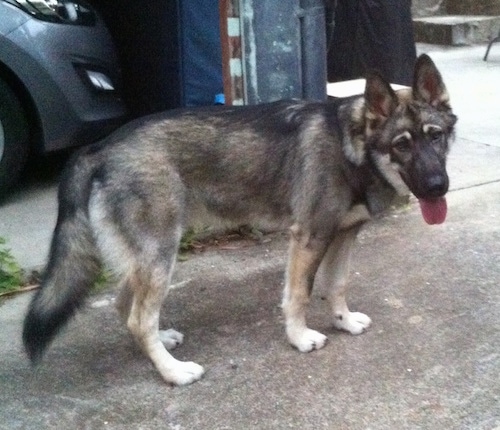 Pablo's dad was an Alaskan Malamute x Siberian Husky mix (Alusky) and his mum was a purebred German Shepherd ex police dog. He is shown here at 6 months old. He is very easy to train, full of energy and playful, but some times testy and needs to be shown who the boss is. When he is tired after a long run pulling me on my skateboard or bike he is also very affectionate, and increasingly so as he gets older. He is often mistaken for a wolfdog. 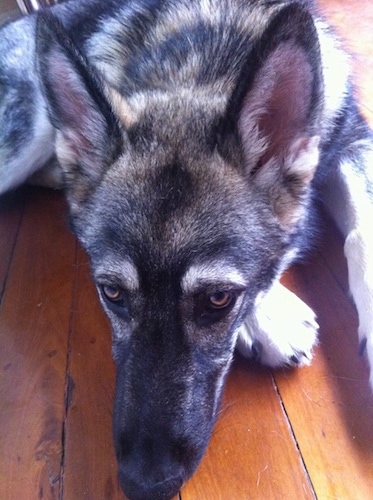 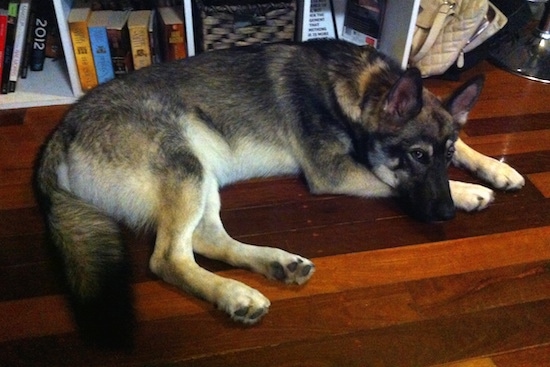 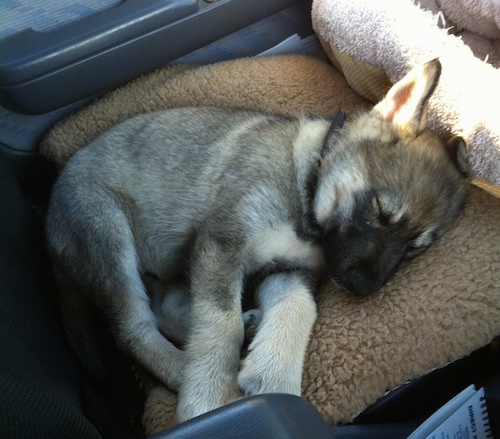 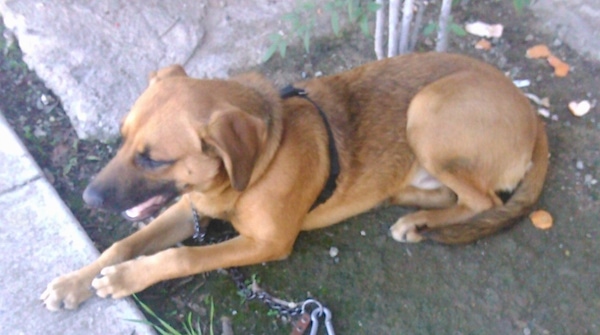 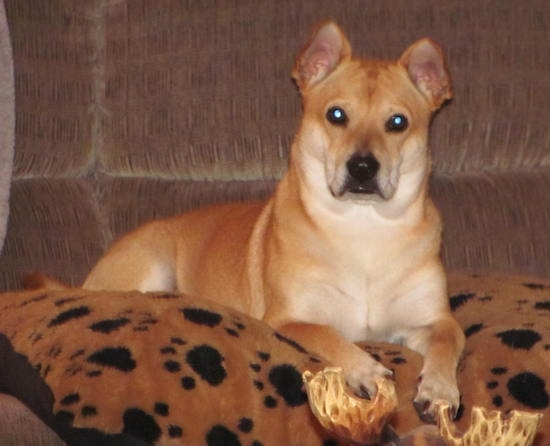 "I adopted a dog from a rescue organization. The veterinarian for the rescue stated he believed Lily was a Shiba Inu / Basset Hound mix. I then took Lily to my vet of 25 years. He also felt Lily is a Shiba Inu / Basset Hound. Wherever I take her, people always stop me and ask what kind of dog she is as she is quite unique. Even the Shiba Inu owners stop and ask if she is a Shiba Inu. I then paid $80 to Canine Heritage to try and find out her breeds. I had to do a swab inside her cheek and send it in. I did not send a picture on purpose. I just got the results and the analysis was Shiba Inu / Shar-Pei / Basset Hound. I looked up Shiba Inus and she looks exactly like them...as far as color and her hair. She does have wrinkles in her forehead and a lot of loose skin around her neck, but her body is long and her paws are those of a Basset. She is so wonderful with my ferret and she found a baby kitten in the woods." 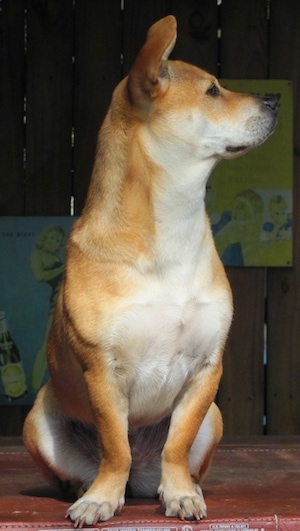 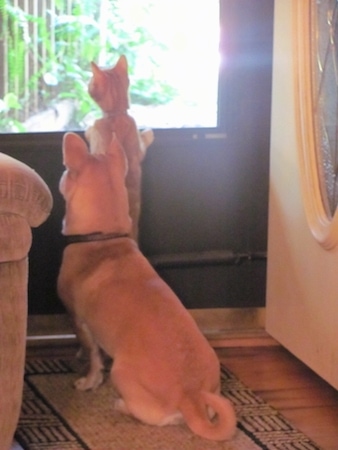 Lily the Shiba Inu / Shar-Pei / Basset Hound mix—"She is such a ham for the camera !!! I have so many wonderful photos of her !! Here are a few to make you jealous from our Dog Beach here in Tampa Bay."