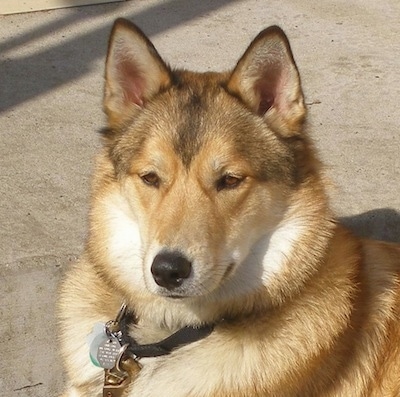 Mojo the DNA tested Husky, German Shepherd, Samoyed and unknown breeds mix at 3 years old—"We got Mojo as a 14 week old stray from our local humane society. We were told he was probably Husky/Collie mix. We did a DNA test and the results were Husky, German Shepherd, Samoyed and a lot of "mixed Breed". A normal DNA test will not test for wolf. We constantly get "he looks like" coyote, fox, wolf. Several people who claim to have worked with wolves are positive he is part wolf, who knows. Any description I read about hybrids, fits his personality and physical appearance perfectly. He has a calm/laid back demeanor and talking quietly to him works best when he is agitated. He has never bitten anyone, and my son has pushed all of his buttons to the limit. He will unobtrusively put himself between us and anything he views as a threat. He howls at all emergency vehicles. He has a sing song whine, and communicates very well, but rarely barks, which our neighbors love. He is wary of people he doesn't know, but LOVES to give kisses to children. Mojo is treat driven and has about 12 tricks. He eats to live not lives to eat." 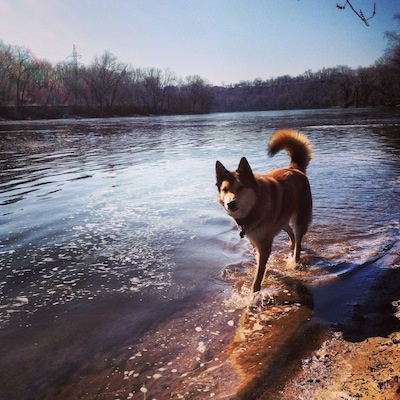 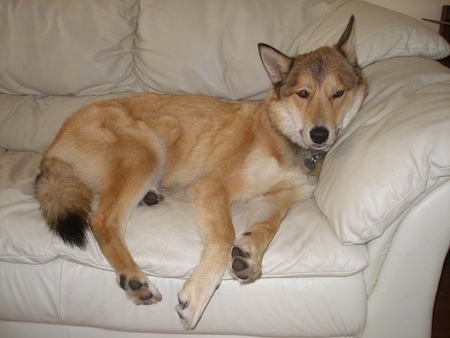 "We have a dog that look so much like Oakley! Patch was rescued by my sister-in-law from the side of the road when he was 4 weeks old. He looks like a giant Jack Russell even though he was only 2.5 pounds when we found him, he now weighs 80+ pounds! Because we thought he was going to be small I was inviting him to sit in my lap each evening for what I called lap time. He still thinks he is a lap dog even though he doesn't fit anymore. lol We know he has Jack Russell but we have been guessing maybe Bluetick Coonhound. His bark sometimes ends with a howl. But also he has some kind of water dog. His coat resist water, his toes are webbed and his tail is definitely made to be used as a rudder! lol I would like to really watch Oakley as he changes."

Patch as a puppy 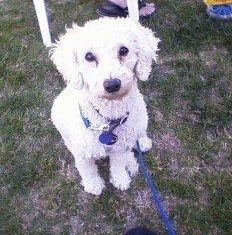 Charlie the Poodle mix at 4 years old—"I just got the DNA breed results for Charlie. He is mostly a Miniature Poodle The other breeds are: Lhasa Apso 6.25%, Manchester Terrier 3.50%, Border Terrier 2.72%, Akita (imagine that, LOL) 2.54%, and Curly-coated Retriever 1.64%. He must get his bark from the Akita because for a small dog he has a loud bark, LOL. I adopted him from the local shelter when he was 10 months old. He lives with a Silky Terrier and a Maine Coon cat. I watch Ceasar Millan and it has helped me in training my dogs. I take them on daily walks with them walking by my side."