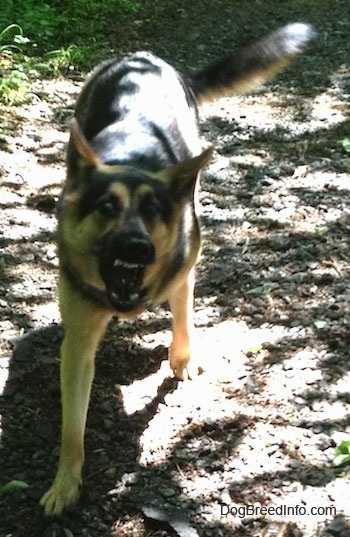 An estimated 4.7 million dog bites occur in the U.S. each year. Nearly 800,000 dog bites require medical attention. The other 3.9 million bites are often never reported. The majority of dog bite stats are based on police, hospital or animal control reports. In reality most actual dog bites go unreported. Therefore those stats are a very inaccurate comparison. This survey shows dog bites reported by either the owner, the person who was bitten or from people who personally knew the person bitten or who knew the dog doing the biting. It is not based on official reported cases. Nor is it based on stories coming from a news source. These stats came from people who had personal ties to the dog or human involved in one way or another.

The stats are of dogs who have nipped, bitten or attacked a human, not dogs fighting with other dogs. If the bite happened while the person was breaking up a dog fight the report was not counted as the aggression was not towards the human but towards another dog. These stats also do not include puppy biting or accidental nips while playing. This is dog on human aggression only. If a dog was reported as a working protection dog and the bite occured while the dog was working the incident was not counted in the stats as it was a bite on command.

The results displayed on this page are not date or time sensitive. The survey counted 7522 people, bitten by 8801 different dogs. The people were asked what type of dog(s) had bit them. If the same dog bit more than once in it's life it was counted as one bite for that breed. The number of dogs listed exceeds the amount of people surveyed as a lot of people were bit by more than one dog in their lifetime.

A dog is listed as a "Mix Breed" when it is a mix and neither the mother or father's breeds were known. The mixed breeds are broken down by size. When one parent was known it is listed as a mix of the known parent. A lot of people who reported being bitten by a dog did not recognize the breed but knew the size. These dogs were counted under "mixed breeds or otherwise unknown", however the dog could have been a breed of dog the person just did not recognize and not a true mix.

One thing which was noted during the process of the survey is, when a dog who's breed has been labeled "dangerous" the dog was more often named by breed. When another type of dog bit it was often simply called a "dog", regardless of the severity of the bite.

Keep in mind the more popular dog breeds will have more reported cases because a higher percentage of people own them, while a rare type of dog would more likely have a lower number of bites recorded as less people come into contact with the breed. 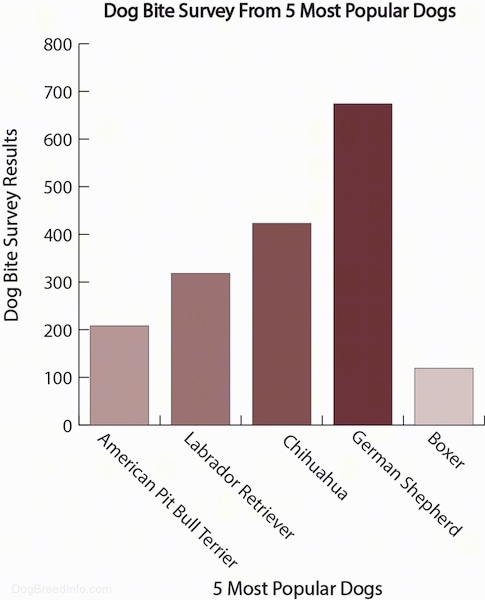 This graph lists the 5 most popular dog breeds during the time this survey ran and shows where they stand in dog bites. Below are the full dog bite results including all breeds and types.

"I have been a vet's assistant for over 10 years and a licensed foster for 3 years. As a vets assistant I have been bitten quite a few times. The common thread with all of the bites seem to be that the owners were nervous and treated their dogs as if they were little people (didn't know dog psychology). I do think there is some genetic tendency for dogs to bite, because some breeds are known to be more sensitive. Most bites, however, are due to human error. I worked at a vet for 3 years when there was breed specific legislation (BSL). Animal control would bring in any Pitbill type dog to have its breed confirmed by a doctor so that the owner would have to follow the BSL. Because of this, I have met literally thousands of pits and can say I have NEVER been bitten by one. This could be due simply to the fact that its a favorite breed of mine and the animals were just picking up on my positive energy towards them. I do think its a combination though, because Pits were actually bred to not bite humans so the humans could break up dog fights unharmed."